Diagnosing issues is part and parcel of a developer's work. This also includes problems with tools such as GitHub and Buddy, and the way they communicate with each other: webhooks.

Webhooks are used to execute pipelines. When a push is made to the assigned branch, the provider sends a webhook to Buddy. Buddy fetches the latest changes and triggers the associated pipeline. However, on rare occassions new commits may not show up in Buddy, even though they were successfully pushed to the repository. As a result, pipelines are not being executed. This is usually caused by networking issues on the provider-Buddy line—something over which, unfortunately, we don't have much control.

One of the solutions that we introduced was manual refresh from the Code tab. The feature allows you to manually run git-fetch and trigger the pipeline (hopefully). If the problem persisted, the only option was to check the status of the webhook in the provider panel. With this week's release, all logs for webhooks triggering executions are automatically sent to Buddy, allowing you to faster diagnose what's wrong. You can find them in the new Repository tab in the project's options: 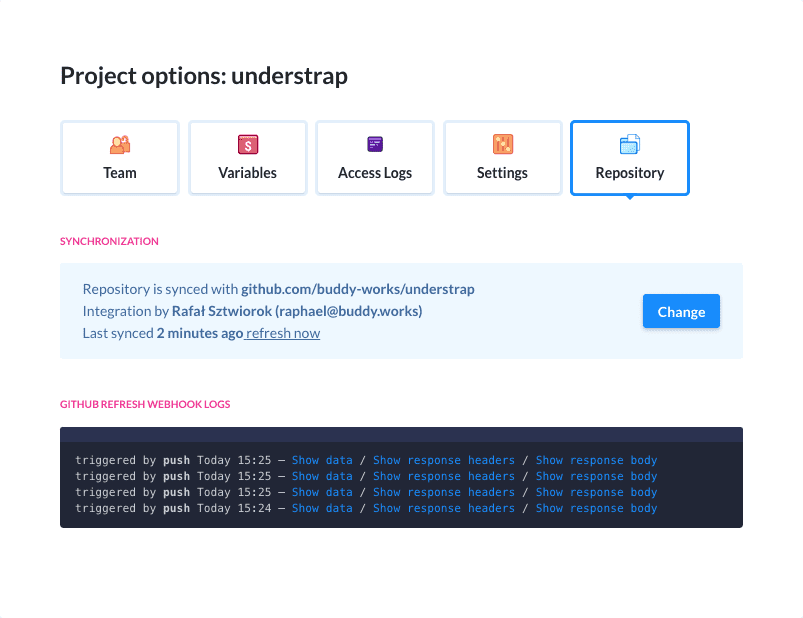 The tab also holds synchronization and refresh options, which work exactly the same as in the Code tab.

We hope this feature will help you and us faster resolve possible issues, especially with the immense growth in the Internet traffic in the last couple of weeks. Stay safe!

From Beanstalk to Buddy in one weekend