How to write Selenium tests in Node.js with WebdriverIO

Objectives of this guide

Selenium is an open-source suite of tools used for testing web applications across different browsers and platforms. Selenium WebDriver, which is the focus of this guide, is used to create automated tests that open a page in a web browser and check its contents for errors, and/or induce interaction with the page, checking the contents later.

Upon completing this guide you'll be able to:

Let's create a task that opens the Buddy website in the Chrome browser and captures a screenshot.

Make sure that you have Node.js installed before you start.

Create a directory for the source files and initialize a Node project. The command will create a package.json file with the dependencies:

When the package is ready, install WebdriverIO and save it as a dependency in package.json:

Now it's time to create a file that defines the actual test: grabbing the screenshot of a website and saving it to a file. Create a selenium.js file and populate it with this code:

To run the example Selenium Node.js test scripts locally, you first need to set up a standalone server:

When the server is up and running, all that remains is to run the test:

The test will save the screenshot to a local directory—a glimpse of what can be done with Selenium. Below we'll show you a more advanced example that utilizes Buddy as a CI server.

Buddy lets you automate the process of testing and delivering your application to the server. This part of the guide will show how to automate screenshot grabbing with our service. 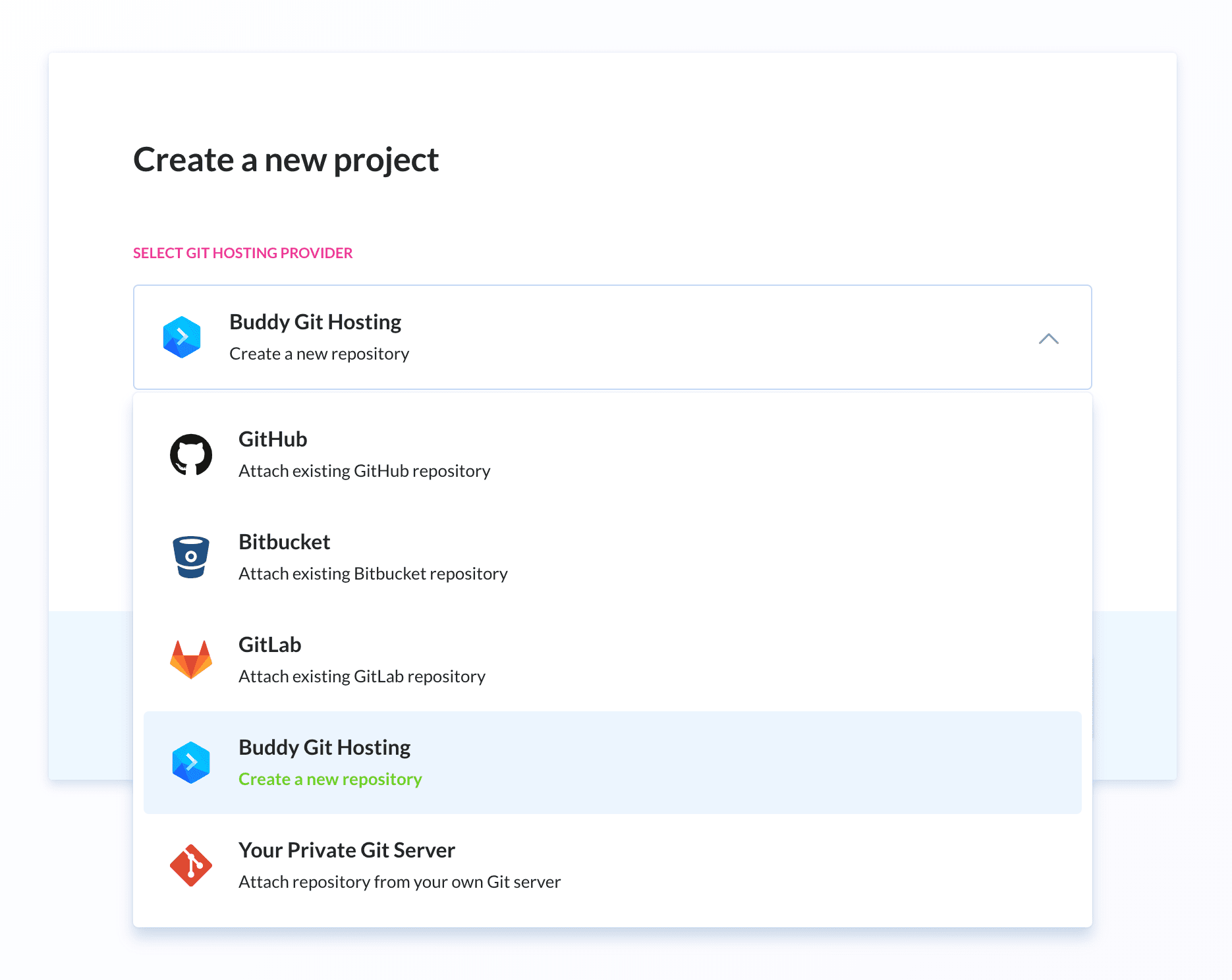 A project is a Git repository with pipelines that describe the way your code is processed and delivered. 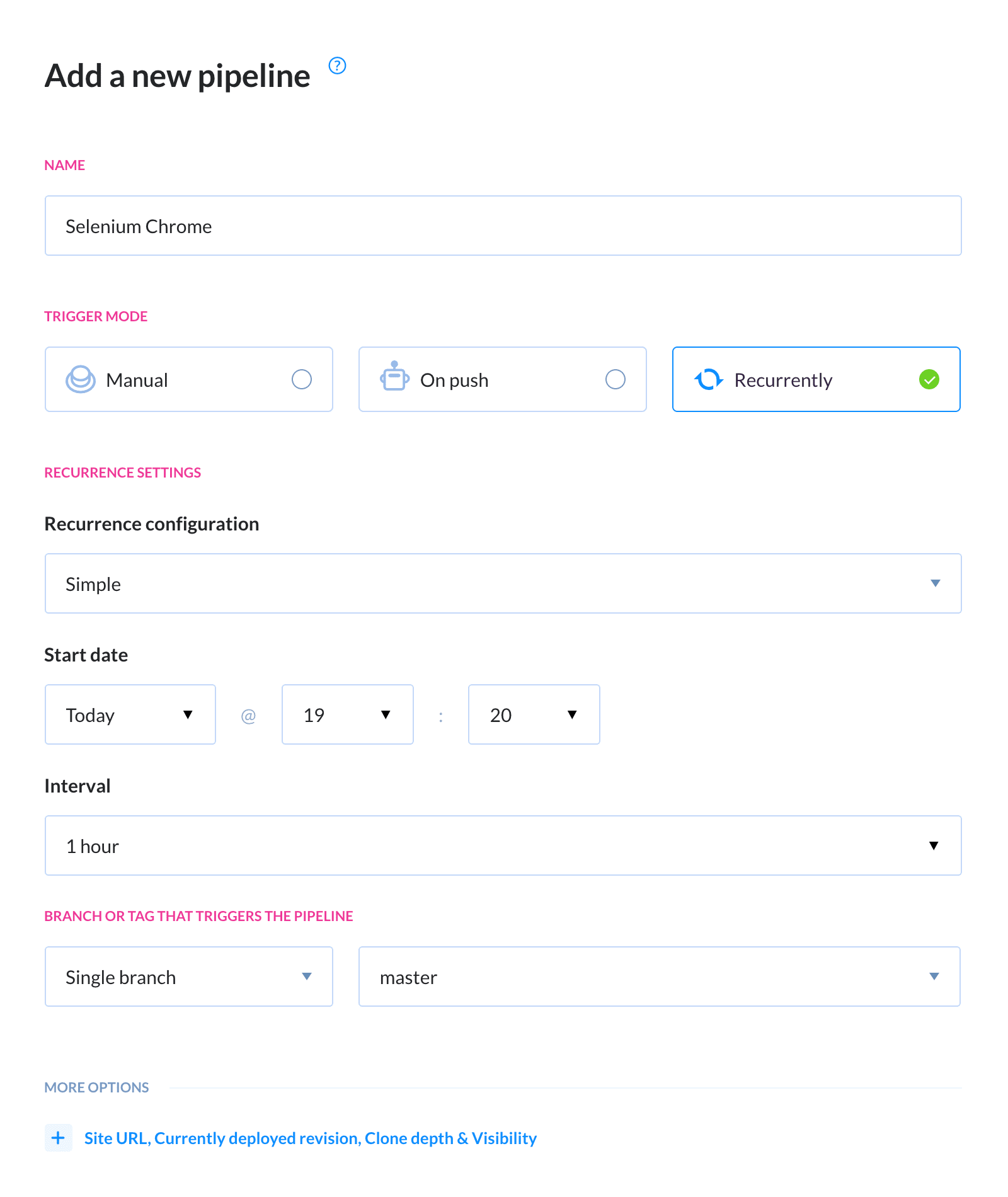 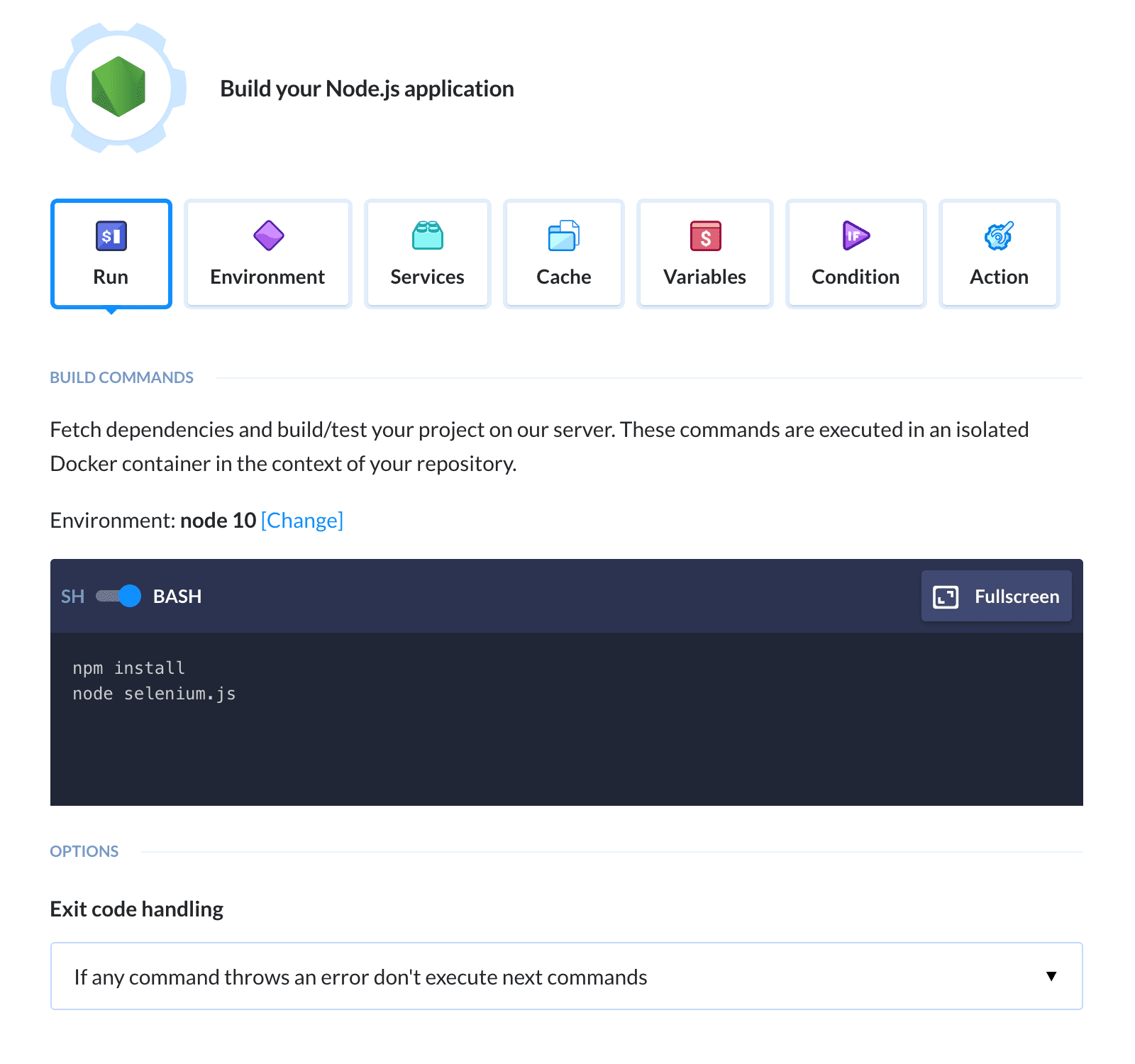 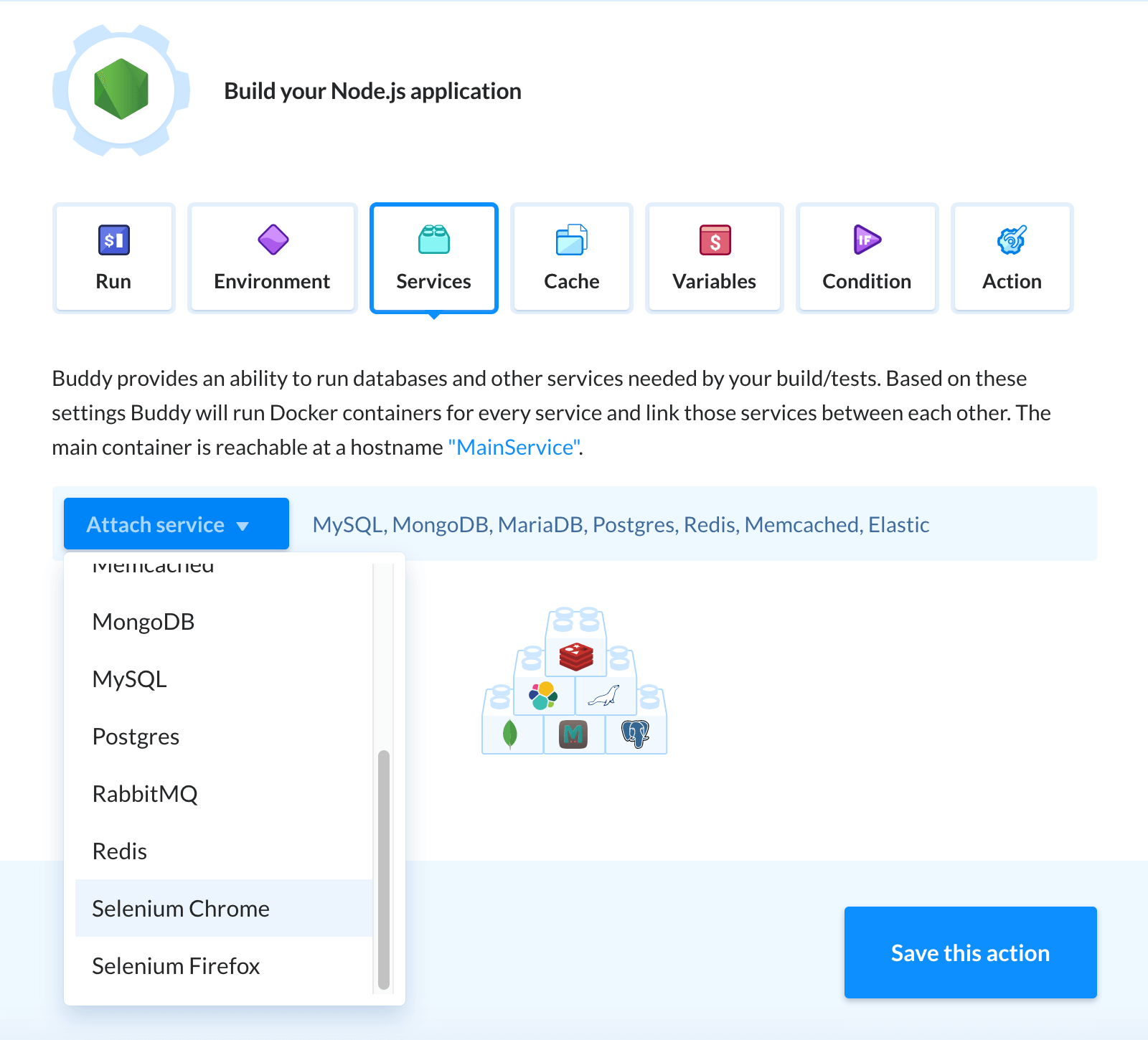 Please mind that the first execution will take a bit longer as Buddy needs to download and install the dependencies.

Buddy will execute the pipeline and grab a fresh screenshot every 1 hour. However, every subsequent execution will overwrite the original screenshot. You can change this behavior by appending the pipeline execution ID to the file name with an environment variable.

To do that, we shall use the $BUDDY_EXECUTION_ID parameter. Let's modify the script:

This way every new screenshot will be generated with the ID of the execution in the name. The screenshots will have unique names which prevents overwriting.

Capturing screenshots is one of many tests that can be run with Selenium. Usually, the tests are run in sequence with a test runner. WebDriverIO has its own test runner, compatible with frameworks such as Mocha, Jasmine, or Cucumber. In this example, we'll show you how to use Mocha in WebDriverIO.

Let's create a brand new project for this:

When asked about the test command, provide the following:

You can accept the default values for the rest of the questions with enter. Now we have to install WebDriverIO:

The next step is defining the framework that we want to use. You can do it with the built-in config creator:

Just like with npm install you can confirm most options with enter—just make sure to enter mocha when asked about the framework.

This operation will generate the WebdriverIO config file called wdio.conf.js. Edit the file and set the browser to Chrome: 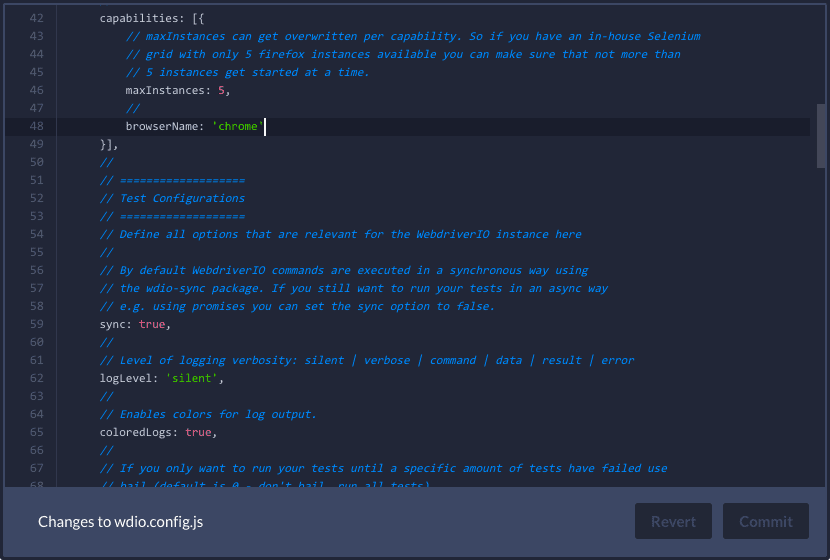 When everything is ready, execute the tests by running

However, since we haven't defined any tests yet, the command will produce a message like this:

Off we go to define some tests, then!

The path with test files is described in the config. By default, the path is

With that in mind, let's create a directory for the specs:

Next, add the first test.js file in that directory:

To execute the tests locally, install the Selenium Standalone Server. With the server in place, simply run the npm command:

You'll notice the first test has crashed because the title of the website was different than expected. 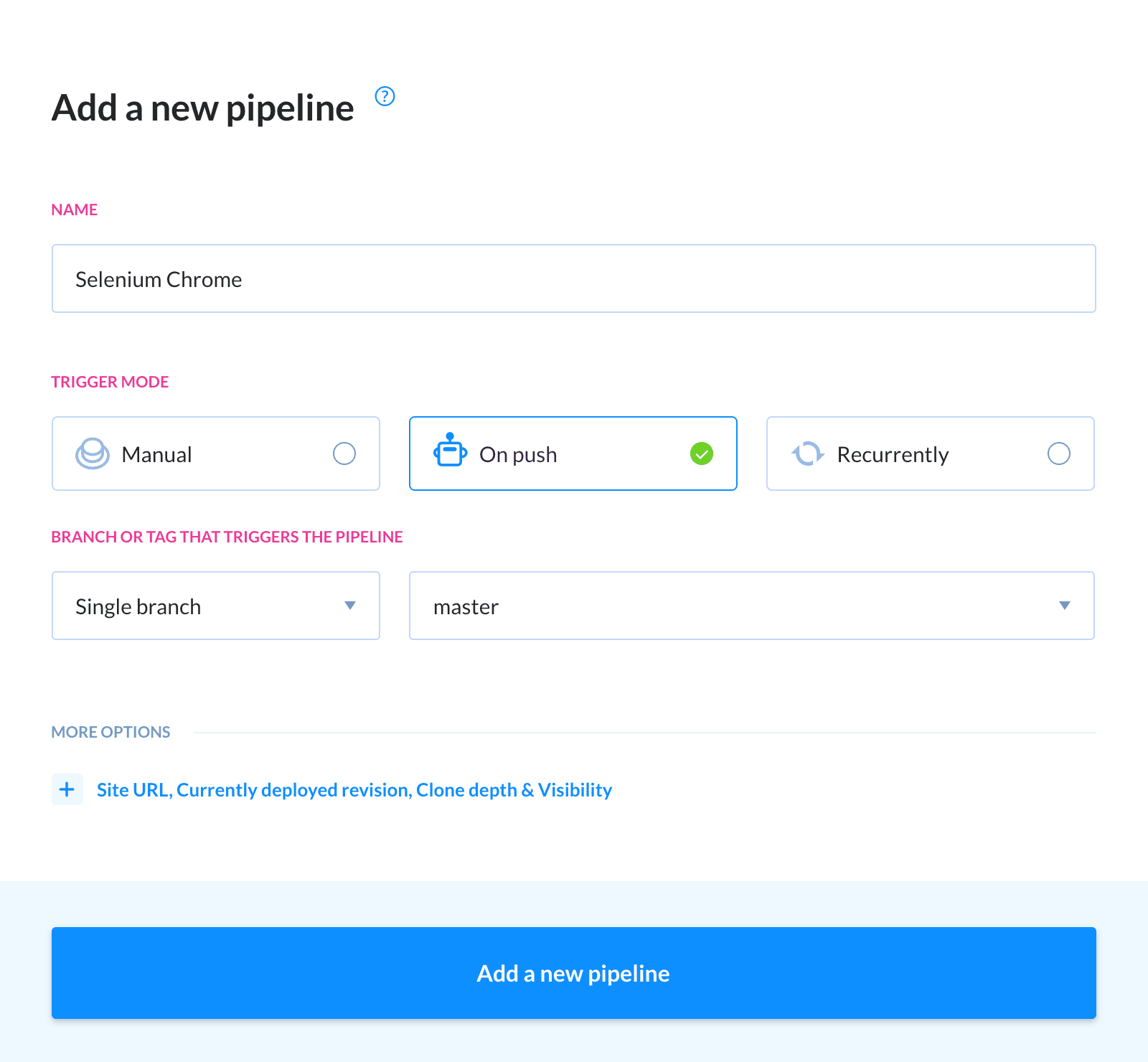 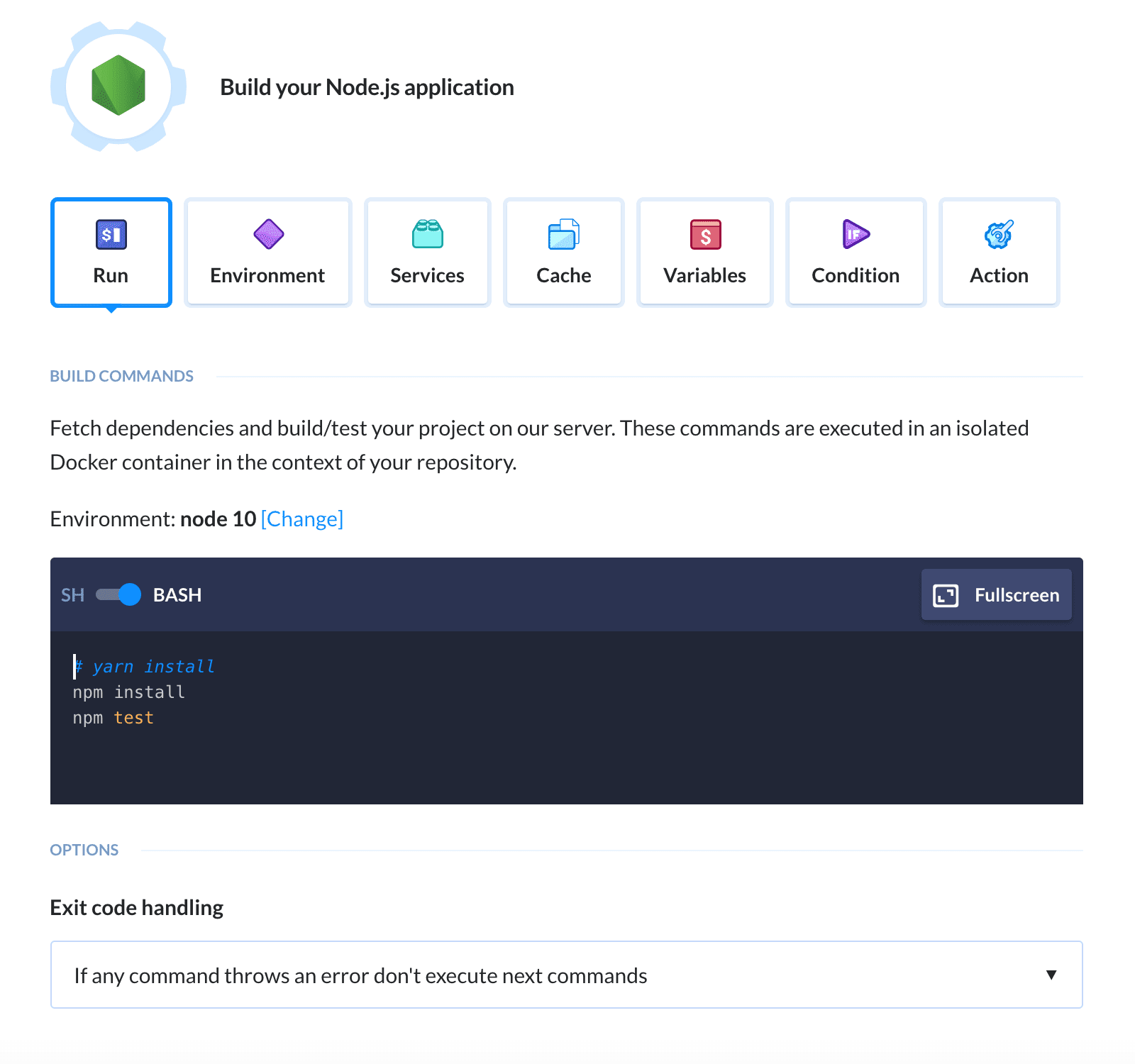 Thorough test coverage on all levels ensures that your application is stable and well performing, with Selenium being just a part of the bigger suite.

Tools like Buddy can help you automate any type of tests, from unit testing to daily integration tests to Cypress.io testing.

What's more, a CI pipeline can be easily upgraded to a fully fledged Continuous Delivery pipeline by adding new actions, like builds, deployments and remote scripts.