What are Kubernetes Deployments?
Copy link

In this post, we shall explore Kubernetes workflows and learn how to configure and optimize a delivery pipeline that will build a Docker image of your application and run it on a K8s cluster.

Kubernetes can be described as a container orchestration platform which scales and runs your application on the cloud or a remote machine. To make it a tad easier, think of it as a container manager which automatically handles operations you would have to otherwise do manually.

Here are a few benefits of using Kubernetes:

Even without Continuous Deployment, Kubernetes is able to facilitate and manage releases of various sizes with very almost no downtime.

Kubernetes itself is made up of several components. However, we will not focus on all of them in this article, focusing mostly on containers. We will also be using Docker.

Containers on Kubernetes run in groups known as pods. Containers in a pod share the same network, storage and address. This means accessing a pod's address would, in reality, mean accessing one of the containers in the pod:

Bear in mind that while you really don't need a pipeline to get an application running on the cloud, because of the SDKs, on a larger scale, teams would find it highly inefficient to rely on local deployments.

A pipeline can be considered as a way to move a service or application from point A to B. In terms of CI/CD, we can divide them into three types:

The microservice pattern introduced a new way of software implementation. Consider this a mobile pattern, involving several moving parts all unified to render a single application.

An example scenario is pictured below. It involves 3 backends developed by different teams, under different repositories, possibly causing some friction between the teams if not handled properly:

With or without DevOps personnel, your team shouldn't have to worry about ops-related issues, like figuring out delivery of the three application components. The most important thing is maintaining the focus on the product.

Back in the day, the deployment stack was built majorly on Shell scripts. This often proved complex for team members without previous experience with the stack. Right now, almost every platform offers YAML. Being a declarative and more transparent language, YAML has a fairly easier learning curve. However, there are platforms out there that unfortunately, still need shell workarounds on YAML.

Buddy tackles those issues thanks to its intuitive GUI and declarative YAML configuration of your pipelines.

Security is a critical component of any pipeline. One of the key security issues is handling keys and secrets. In most cases, keys and secrets are added onto platforms as environment variables, after manual encryption and later translated and decrypted during the build. In the midst of defining these jobs, it becomes very easy to leak these details either through printing keys or versioning to public Docker images. It is also advised to avoid use of unrestricted API keys on third party services.

How Buddy handles security - Auto-encryption and manual encryption with a push of a button. - Action-variable suggestion and default environment variables common to repositories

Platform correlation has to be one of the greatest challenges. Various teams handle this differently: from out of the box platform-specific YAML modules to scripted connections. It is recommended to take a module approach, in lieu of scripted pipelines, frequently involving several steps: from fetching SDK's, to authorization, to actual deployments. This often leads to a fairly complex, error-prone and bulky pipeline.

Buddy offers a variety of itegrations with major providers and a schema-rich buddy.yml script with declarative pipeline actions.

In this example, we will be deploying a Mangoes API backend from a GitHub repository into a Kubernetes cluster running on the Google Kubernetes Engine (GKE). Mangoes are fun!

With all that in mind, and without further theory, let's have a look at workflows. We will demonstrate a Kubernetes pipeline that syncs a cluster in a simple yet efficient pipeline. Below are the steps we will go through to get this application running:

Begin with forking the Mangoes project on GitHub. Next, log in to your Buddy account, add a new project, and select the repository from your dropdown list. Once the project is synchronized, Buddy will detect the stack in your repository (this particular backend runs on Express.js):

Our current goal is to deploy a backend to a cluster. To make this goal more specific, let's break it down further into steps:

Go ahead and click Add a new pipeline. This particular pipeline builds and deploys on every push to a Master branch, which qualifies it as a Continuous Deployment pipeline. Make sure to apply the settings below:

With the pipeline created, we can get down to the actions. Our first step is to build a Docker image. Go ahead and select Build Image:

The next step will be providing a name and path to the Dockerfile. A quick glance at the repository will show the details as below:

Leave the name as it is (Dockerfile) and set the path as the repository root:

Under the Options tab, add in your registry details. If it's your first time setting with Kubernetes, I recommend Docker Hub. Othwerwise, select the one matching up with your vendor, i.e. Google Cloud Registry.

The Docker image for the Mangoes app is also publicly available here.

Our pipeline can now identify the first step towards deploying our application! Let's add in the second step by clicking the + icon right below the Build Docker Image action:

This new action is going to deploy our backend to a Kubernetes cluster on Google Cloud. Select Apply Deployment in the Kubernetes section of the action or enter the name in the search input:

Click here for a full breakdown of all actions, their features, and associated integrations.

On the Setup tab, add in your cluster details. Buddy natively integrates Google Kubernetes Engine, Amazon EKS, and Azure AKS. It also supports private clusters. For the purposes of this guide, we will run our image on Google:

In order for Buddy to deploy to GKE, API calls need to be authenticated. We will use Service Accoounts as the authentication method for this example. In this case the service account is very basic, only having access to Kubernetes through the Kubernetes Engine Admin role.

To learn more about gcloud's roles and permissions, refer here.

Make sure to create and download a key for your service account from Google Cloud and paste it in the Service Account Key field on Buddy (the service will automatically encrypt your key). The last step is selecting the YAML file with the configuration file below:

Now, switch to the Options tab and select the kubectl version. Feel free to use the version supported by your cluster. Otherwise, leave it set to latest. Set the rest of options as shown below, with the Grace period set to 30 and the Timeout to 0:

In a similar fashion, create another K8s deploy action for mango-server-svc – a service that will expose our application (make sure to use a different YAML file for that). The whole pipeline will now look like this:

Let's see if everything works as expected. Click the Run Pipeline button in the top-right corner of the page to start the build:

A pop-up will appear with an option to deploy to a specific commit. Proceed without change or select a commit of your choice:

After triggering the execution, you will be directed to the progress page with all your actions listed as either queued, completed or working (in progress). If an error occurs on any of your actions, you can check the logs for details on what happened:

If everything goes through correctly, Buddy will mark the job as successful in a blissful green color:

Here's how the deployment looks running on GKE, exposed by the service that we deployed in the final step:

Check out the Kubernetes documentation and Buddy docs for more context and reference.

Kubernetes is a container-based platform for deploying, scaling and running applications. Buddy lets you automate your Kubernetes delivery workflows with a series of dedicated K8s actions. 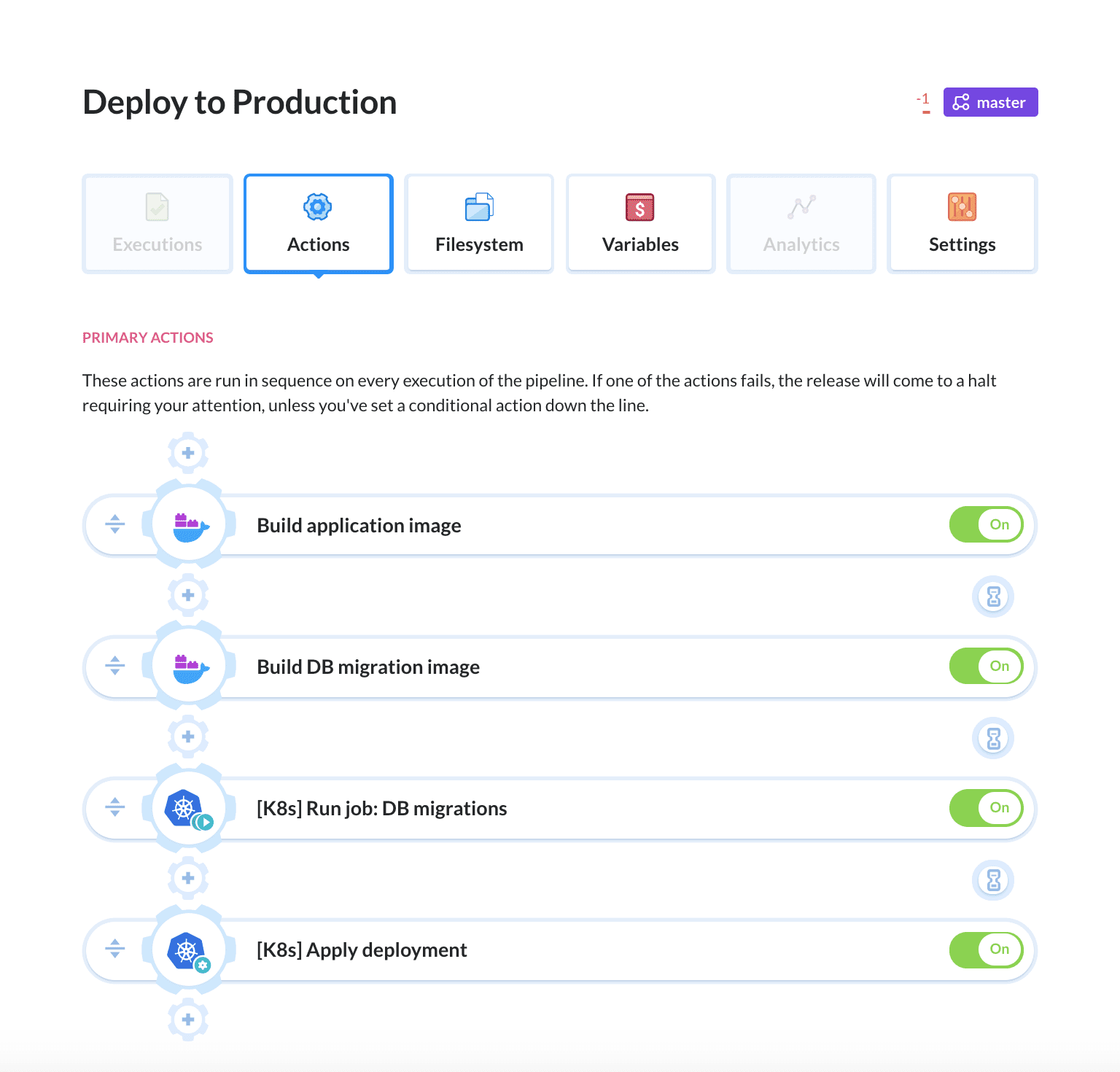 Each time you make changes to your application code or Kubernetes configuration, you have two options to update your cluster: kubectl apply or kubectl set image.

In such case your workflow most often looks like this:

With Buddy you can avoid most of these steps by doing a simple push to Git! :)

How to automate Kubernetes releases on every push
Copy link

We now know the basics of Kubernetes deployment strategy. Let's go through some of the cases that will help you optimize your delivery even better.

If you often use kubectl apply or kubectl set image, this is for you!

You can use the number of the revision for the tag with environment variables.

Select which container should be replaced and which image you want to use. Make sure to enter the name and tag of the image from step #2 above.

Buddy will turn off the running nodes and switch them back on with the new image version.

If you are using a tag which is constant for every execution (eg. branchName) but different from 'latest', make sure to set the Pull Policy to 'Always'. Find out more about updating images. 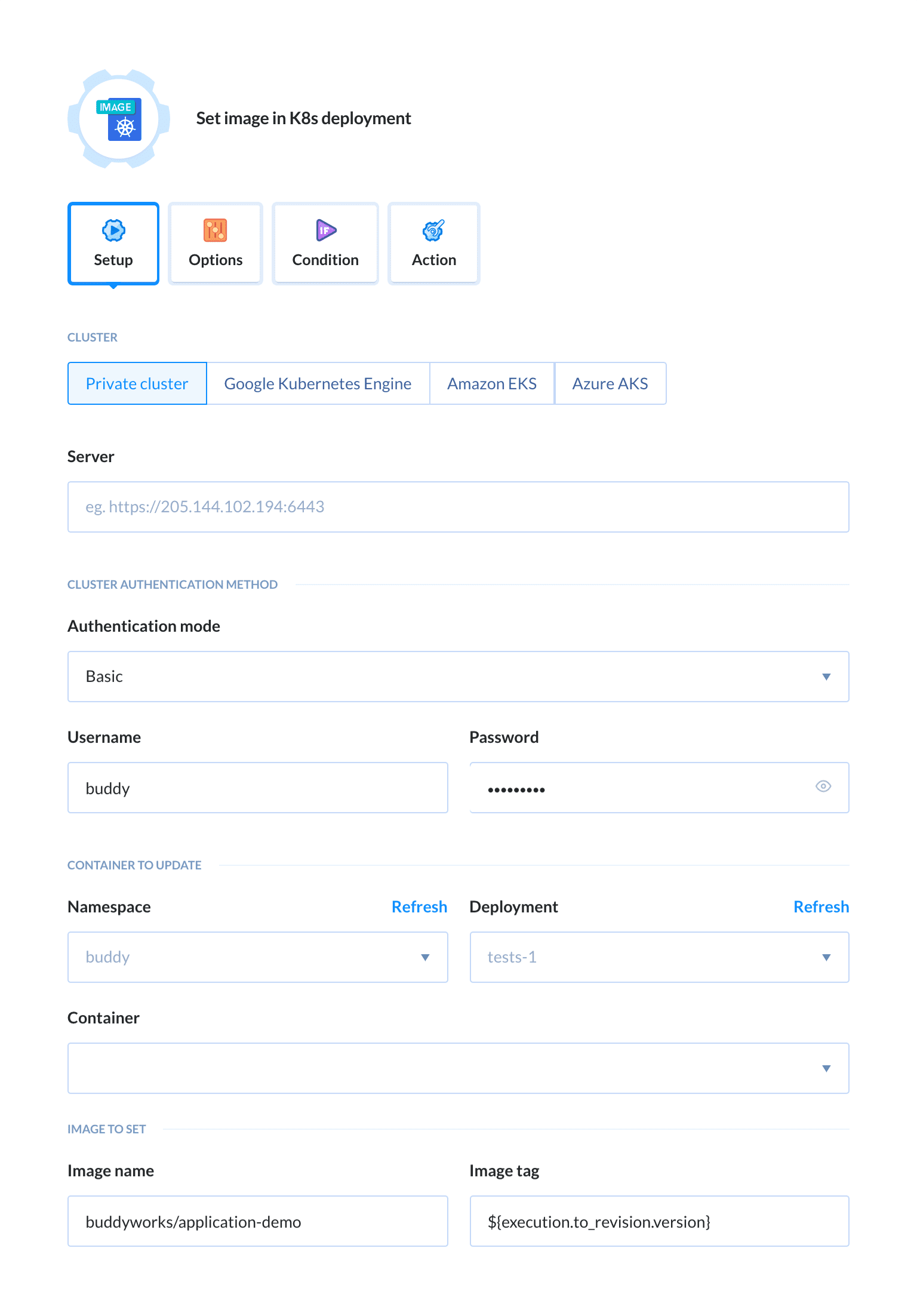 With every change in the YAML config or in your app code, Buddy will apply the deployment and Kubernetes will start transforming the containers to the desired state.

The action will wait for the status of deployment, checking its rollout status. If any errors occur, the pipeline will stop as 'failed'. 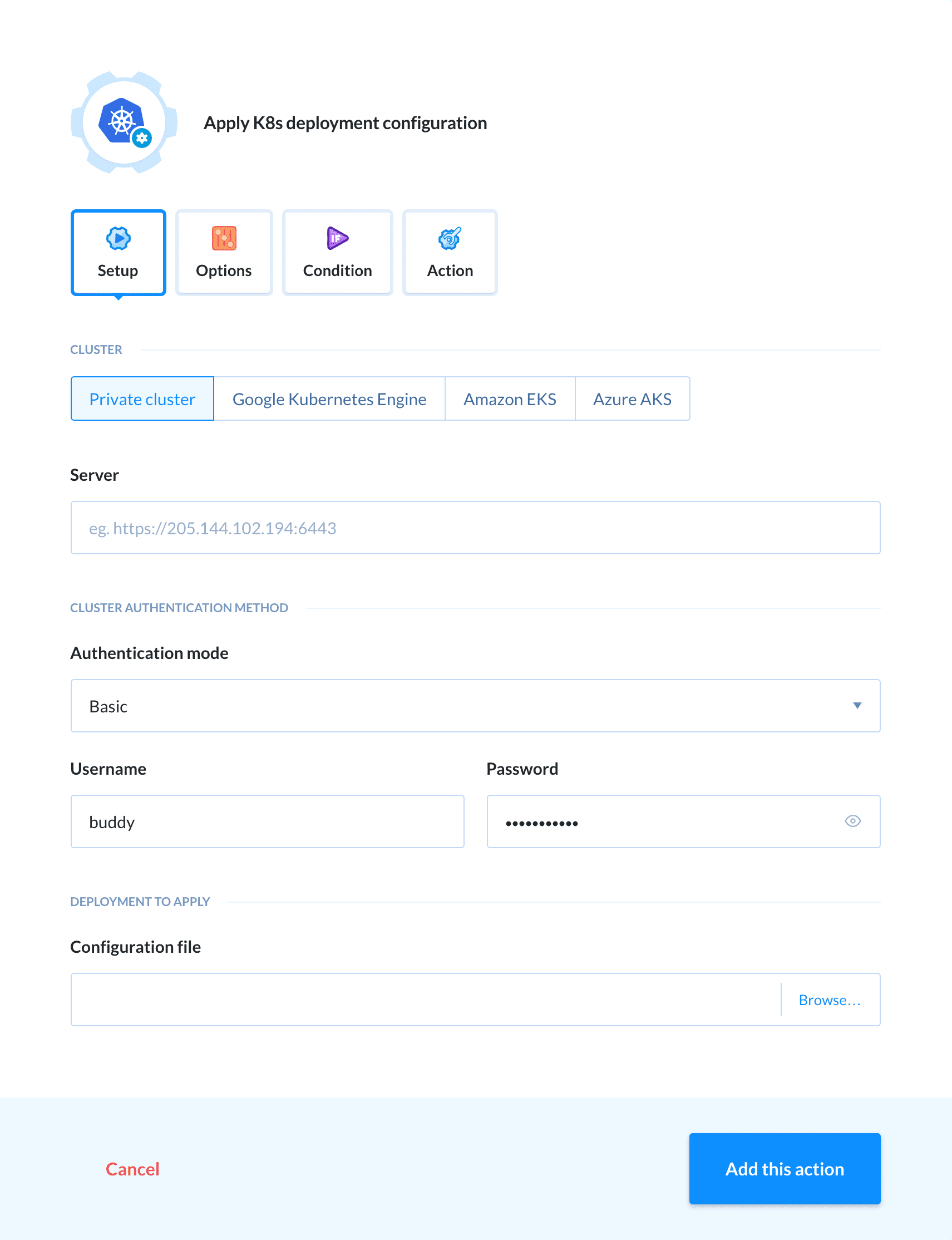 How to automate running Kubernetes pods or jobs
Copy link

If you often run tasks in a container, such as:

you can either use pods or jobs. The first type launches a single pod with the task; the second one launches a series of pods until a specified number of them ends with a successful status.

Let's say you have an application on a K8s cluster and the repository contains as follows:

In this case, you can configure a pipeline that will:

B. Push them to the Docker Hub (second action) 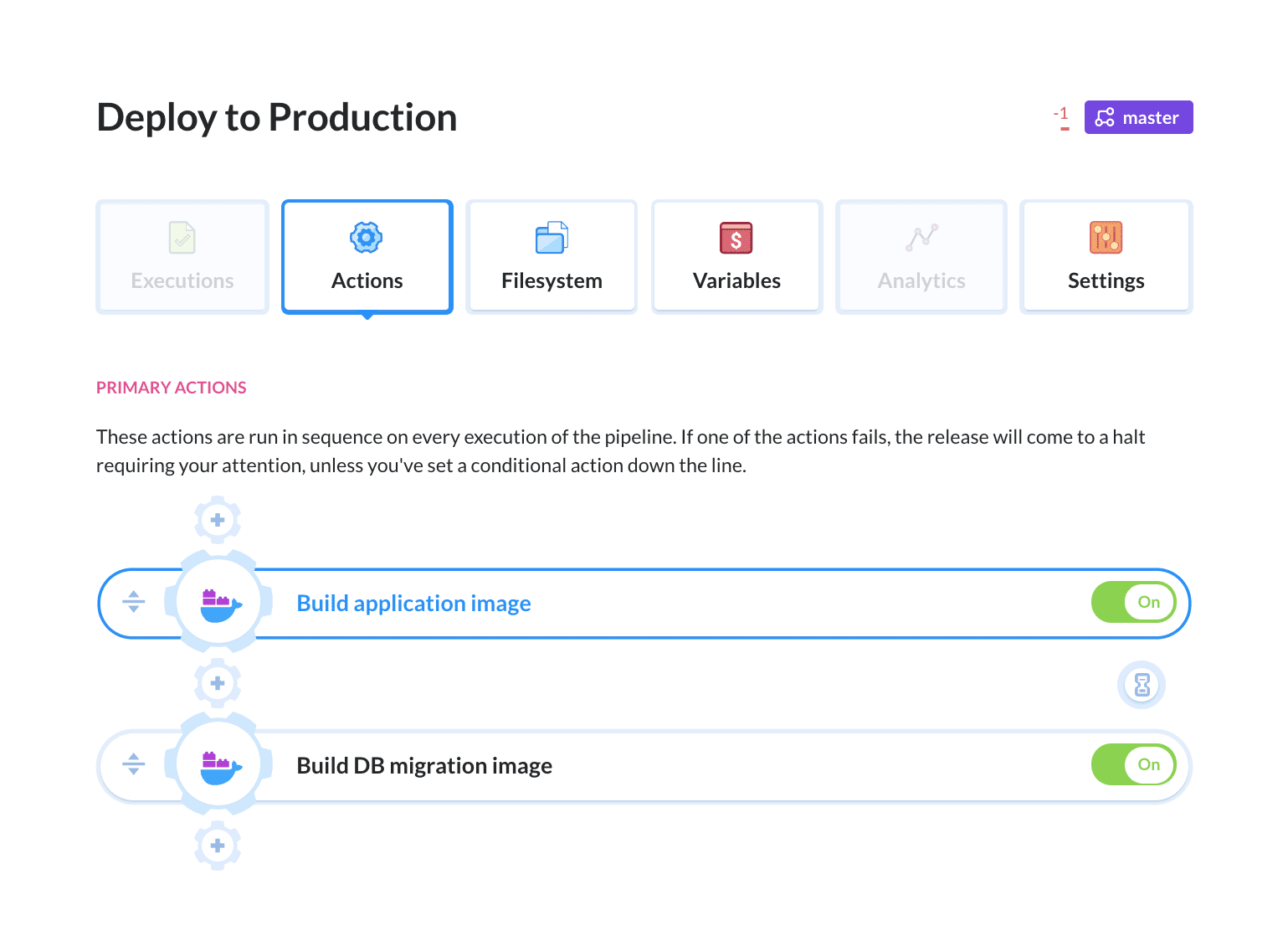 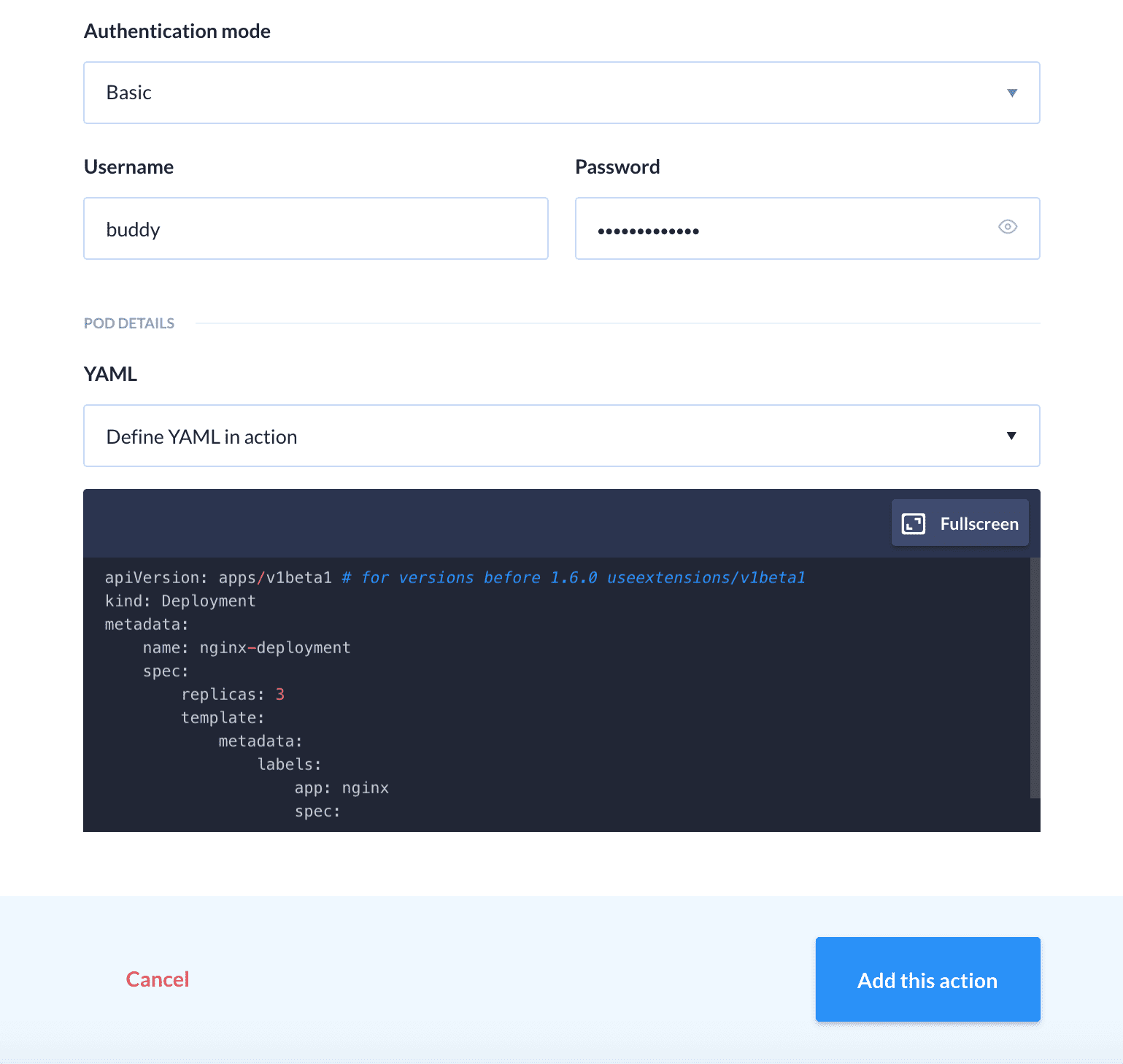 Once you make a push, the pipeline will automatically build and push the images to the repository and run your migration scripts. How cool is that?

The job action will wait until the command has finished executing. If the exit status is different than 0, the action will be labeled as 'failed'

D. The last action is using either Apply K8s Deployment or Set K8s Image to update the image in your K8s application. Once you add the action, the whole pipeline will look like this: 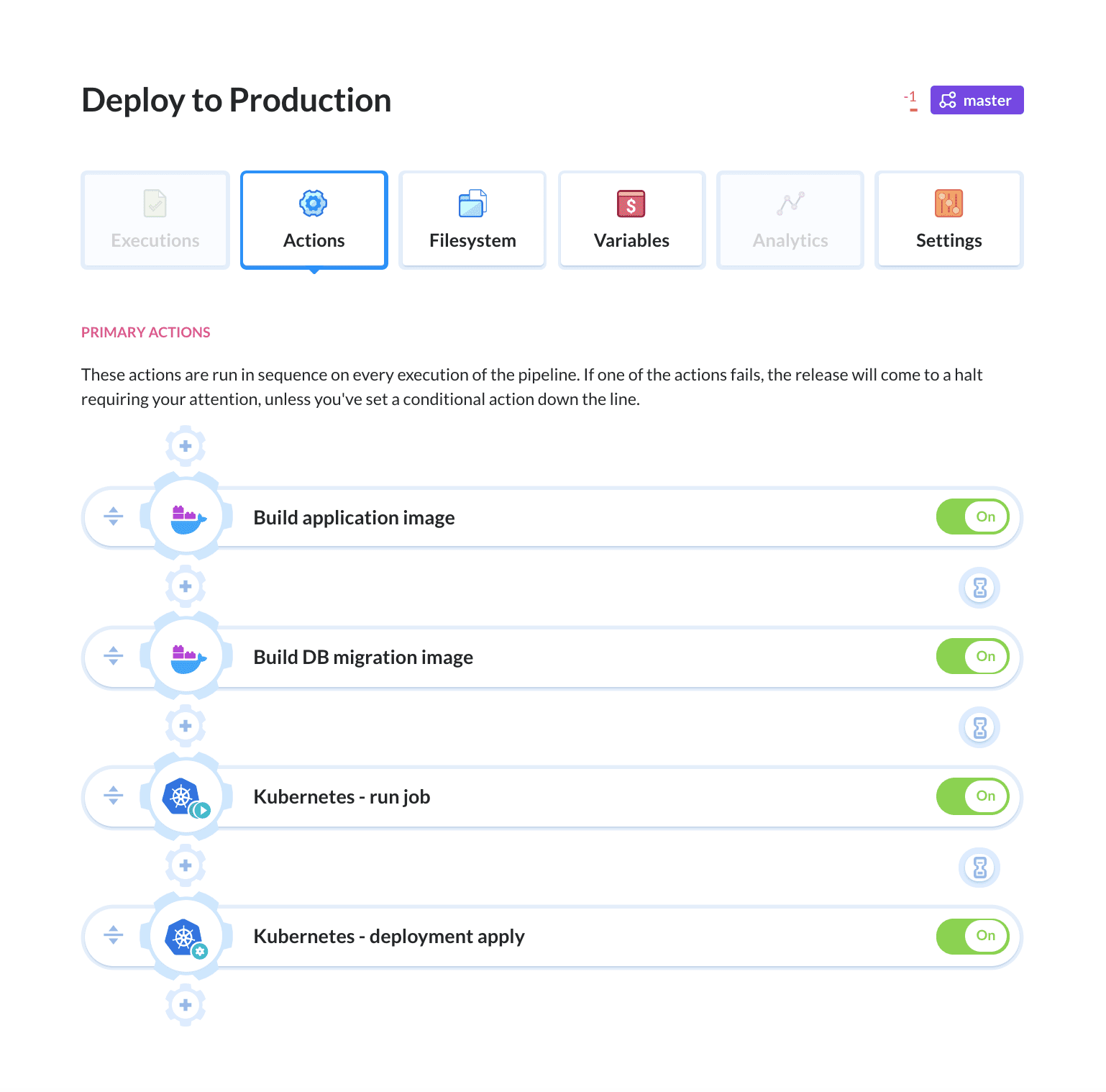 When everything is in place, make a push once again and watch Buddy automatically perform the whole workflow.

If you're not sure if you can apply our solution to your workflow, please reach out on the live-chat or drop a line to support@buddy.works and we'll do it for you.