In this article, we'll show you how to create a Docker image of a Laravel application, push it to an image registry, and use Docker in Continuous Delivery.

Laravel is a fast, user-friendly, and well-documented framework that you can use to build all kinds of web applications. According to its official website:

Docker is a virtualization method that has a huge impact on today's software development landscape. Its main draw is a different approach to virtualization architecture that eliminates the "works on my machine" issue when working across different environments. A perfect companion for developers who code in collaboration with others. Here are some key aspects of Docker:

Hungry for more insight on Docker and containers? Watch this video by The Simple Engineer:

In theory, Dockerization means activities leading to the launch of the application in a Docker container. In case of a Laravel app, this can be translated into the following steps:

In this guide, we're going to containerize a simple calculator written with the Laravel framework. Simply fork the repository and Dockerize Laravel with the instructions below!

To check out how the calculator works before baking Laravel into a Docker image, run this command in the repository:

If you'd like to see how to create such app from scratch, we described how to write and run the calculator in this guide.

Begin with installing Docker on your machine:

The Dockerfile is a text that defines the contents and launching method of our Docker image. Create a new file in the repository and name it Dockerfile. Populate the file with the following lines. We are going to break them down one by one later on.

Just like we mentioned in the introduction, Docker images can be inherited from other users. Using official Docker images guarantees the template is well written and prepared. In this case, we shall PHP in version 8.0.5:

Docker images are shared through image registries. The most popular is Docker Hub. You can browse the list of all official Docker images here.

Here we set the working dir in the container to /app, copy the application files to it, and install Docker compose with composer install"

Use CMD to set the command that will be run when launching the Docker image. In our case, we're going to serve the application with php artisan set to port 8181:

Expose port 8181 outside the launched container. This is the same port our application is going to use:

The -t parameter is the tag of the Docker image. The dot at the end of the command means that we're going to build the image in the context of the parent directory. In other words, the files that will be copied to the /app directory in the container are files from the contextual directory of the build (in this case: repository directory).

Time to run Laravel in Docker! Launch the container with docker run. Don't forget to add the parameter with the port!

Your Laravel application is now available from your browser at http://localhost:8181.

Once created, a Docker image can be pushed to a Docker registry from which it can be pulled and run by other users. You can create a private registry and serve images from your server, or use a cloud-hosted solution. Currently, the most popular cloud registries are:

In this part of the guide we'll show you how to add an image to Docker Hub so you can use it on another computer. Here's what you need to do:

Logging in to Docker Hub

The download from a public provider might take a while depending on the load, so if you run your business from a location with a slow internet connection, consider setting up a private registry for better performance.

Docker in practice: Use cases

So far we've covered the technical process of building and sharing Docker images. Below we share some concrete appliance of Docker in everyday work.

Every developer knows that before you start working on an application you first need to prepare your work environment. This involves a series of pains, including but not limited to:

The more advanced the project, the more dependencies and setup it involves, which considerably prolongs the process of delivering the application. We won't even mention the dependency hell when you're trying to develop two applications with different requirements on one computer.

With Docker, you don't need to write documentation detailing environment setup because the entire working environment is defined in the Laravel Dockerfile and safely stored in Git. This means you can go back to any revision of the file in the repository to see how your project evolved.

What's even more convenient, you don't need anything but Docker to run the software on your computer because everything else – frameworks, libraries, dependencies – is stored in the Docker image. What you do is run git clone, docker build, and docker run and the app is already running on your computer.

It's also possible to create a Dockerfile that will serve the application directly from the directory where you code, so that you won't have to rebuild the Docker image on every change! 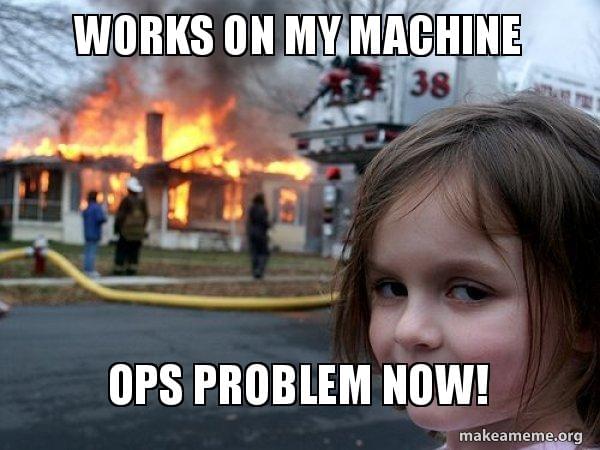 Every developer knows that phrase

The phrase above is bound to appear whenever a tester and a developer discuss a new feature. In reality, 99% of such problems result from compatibility issues between different environments in which the application is run. One developer codes the application on Linux, another one on Mac, and QA runs the tests on Windows. With Docker, the environment is the same for every member of the team: the app is forwarded to QA in the form of a Docker image pre-configured in the Dockerfile.

Usually, the development process is divided into three consecutive environments:

Each of these environments is assigned to a separate branch in the repository. When the work in the development branch is over, it is merged to the staging branch, where the QA runs their tests. Then, the staging branch is merged into the master (production) branch and the application is ready to be reviewed by the client.

With Docker, each environment is described in a separate Dockerfile for every branch. If you change something in the DEV branch, the STAGE branch remains in its original state until the changes have been merged.

Buddy is a tool that lets you streamline the process of building, pushing, and running Docker images to a manual trigger or a single push to the repository.

In this part of the guide, we'll add a pipeline that will build and test a Docker image, push it to the selected registry, and run it on the server. 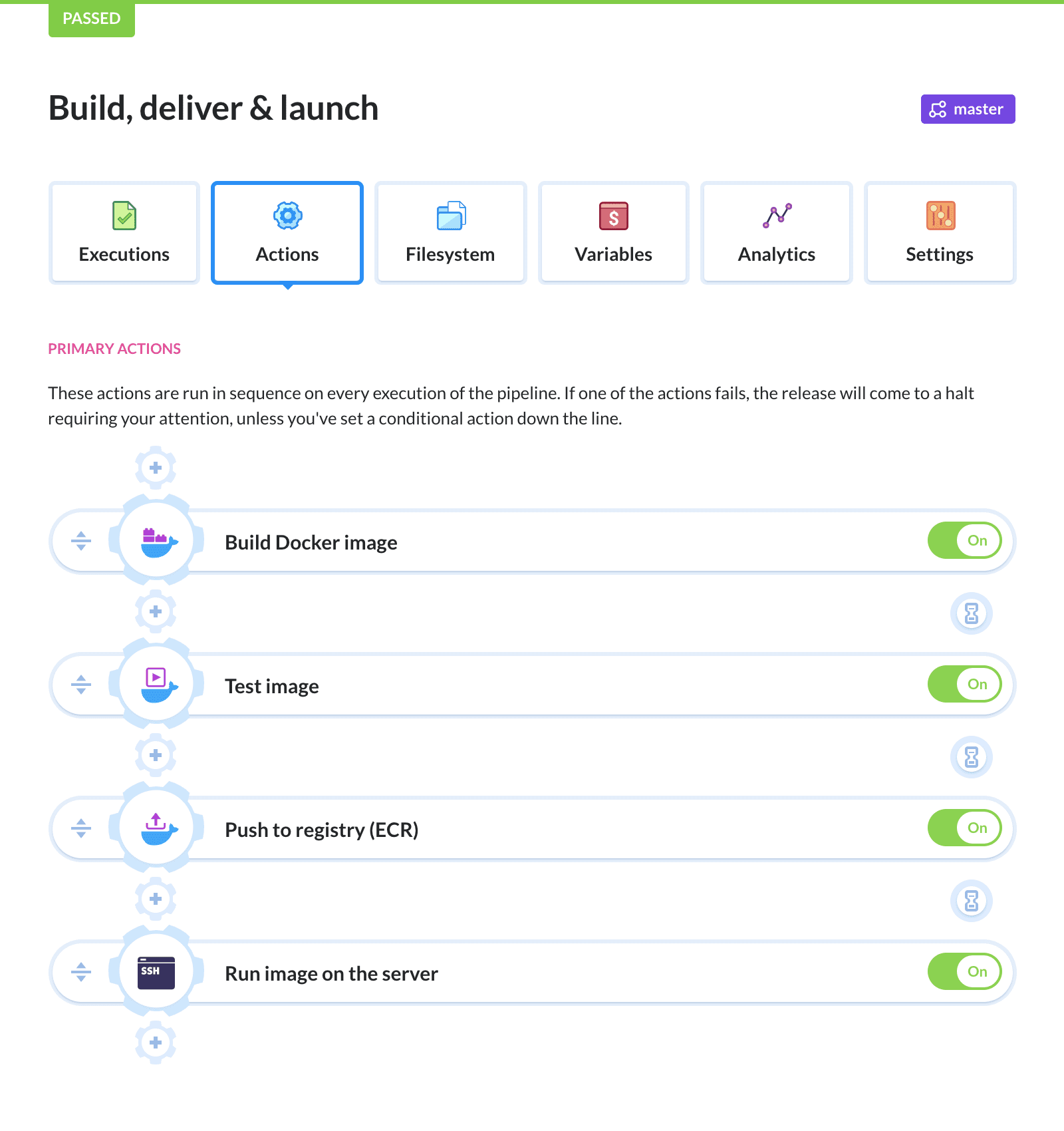 Buddy drops configuration-as-code in favor of visual pipelines that can be arranged using preconfigured actions.

All you need to start is a repository with your project: 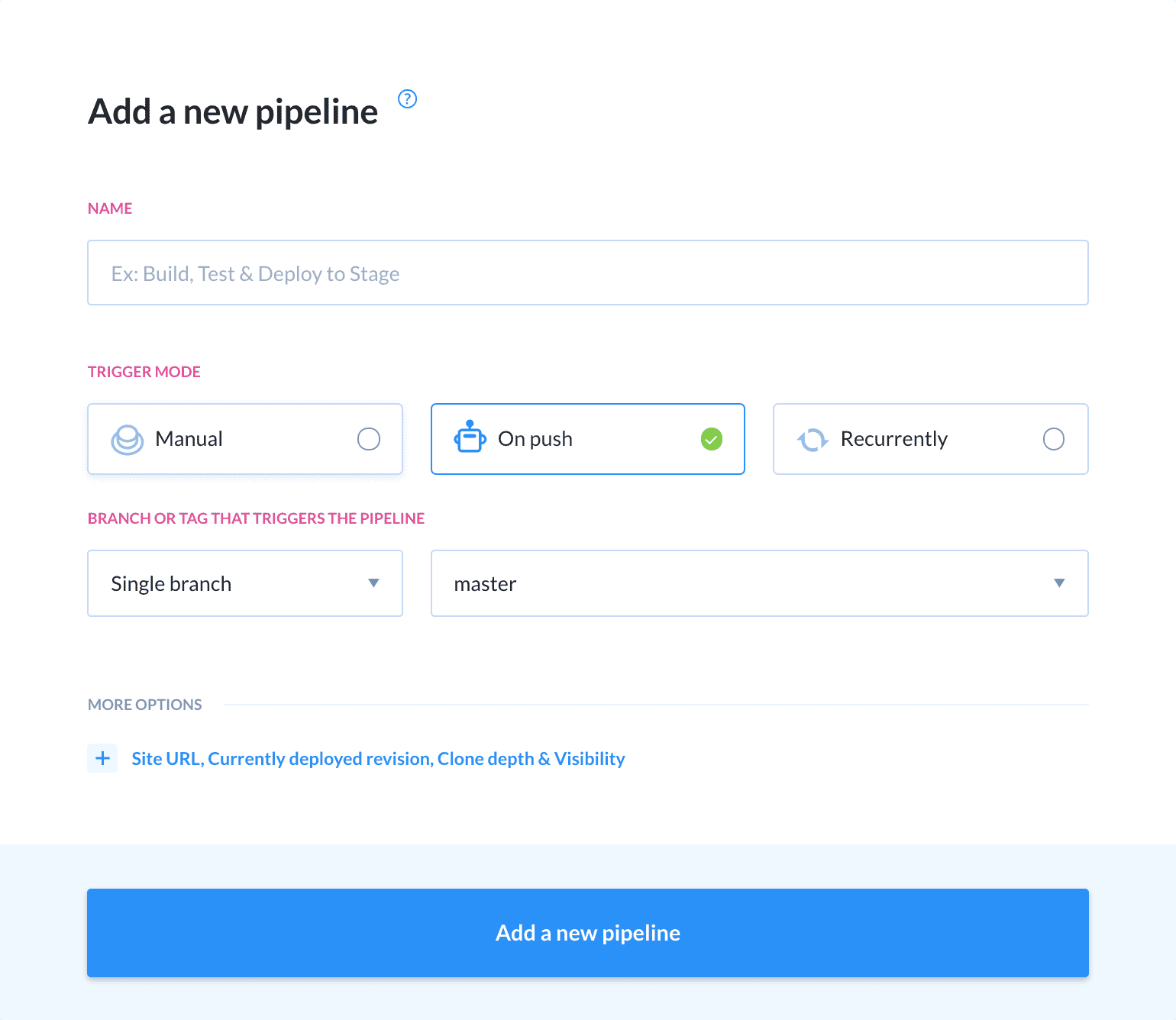 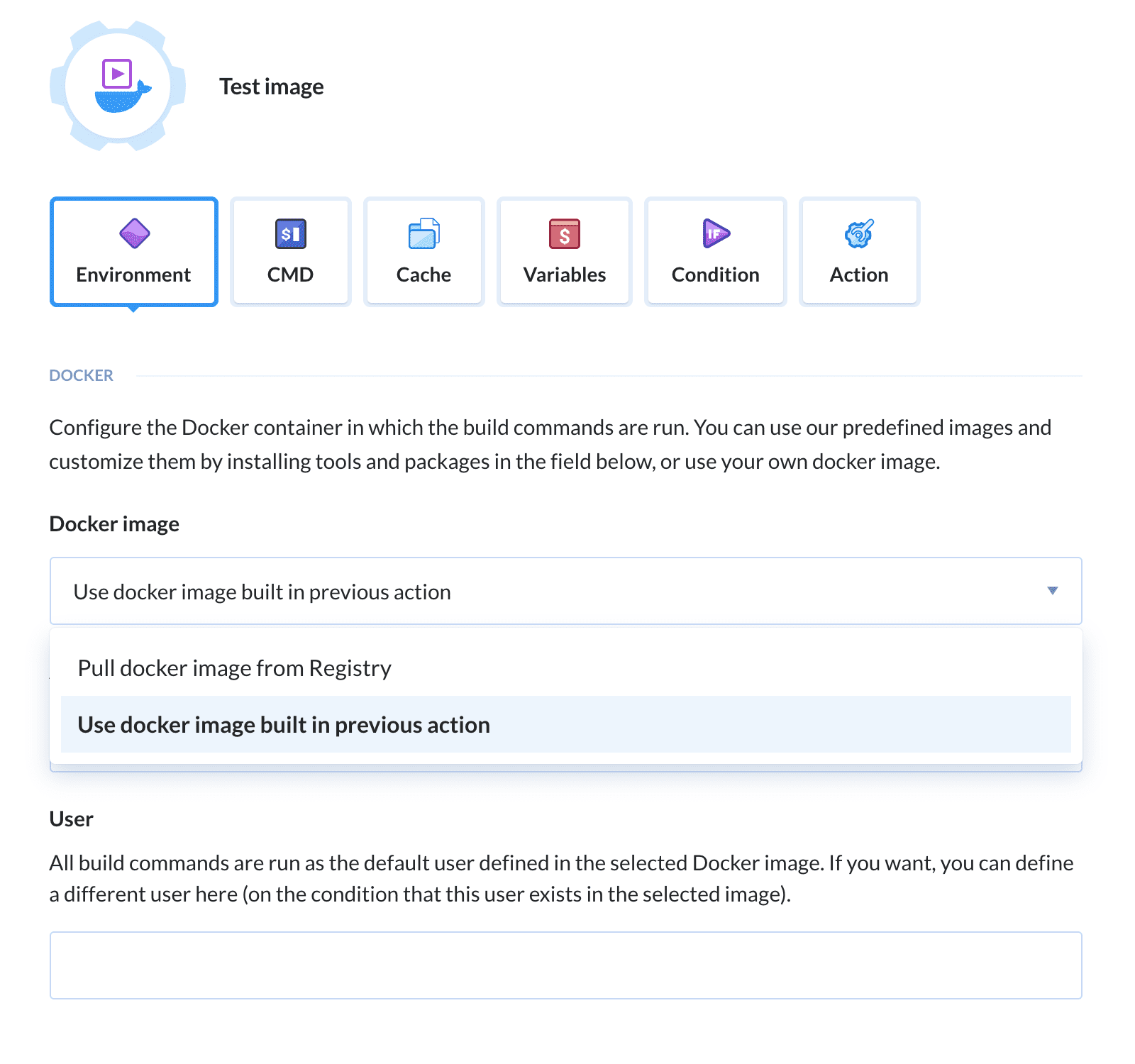 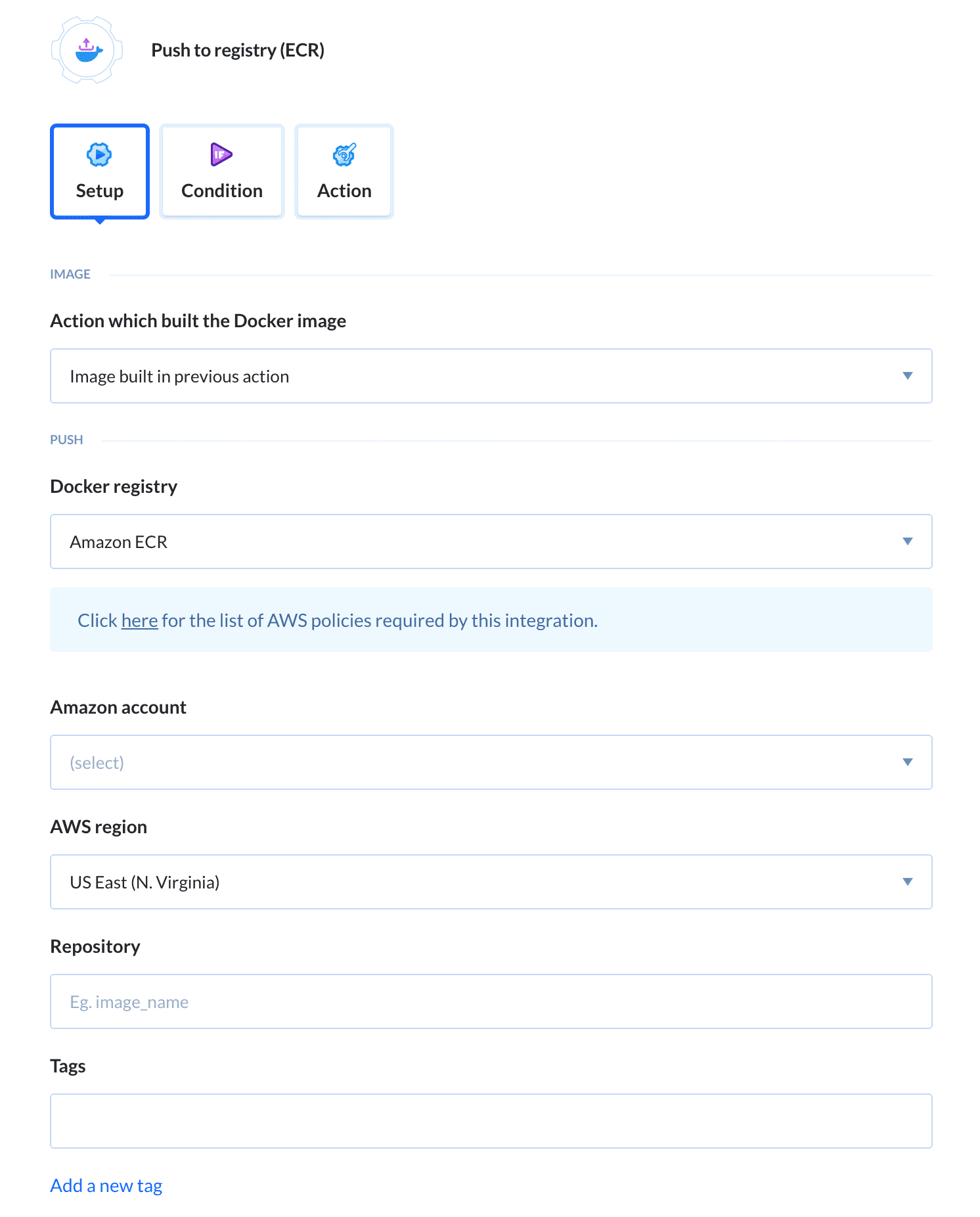 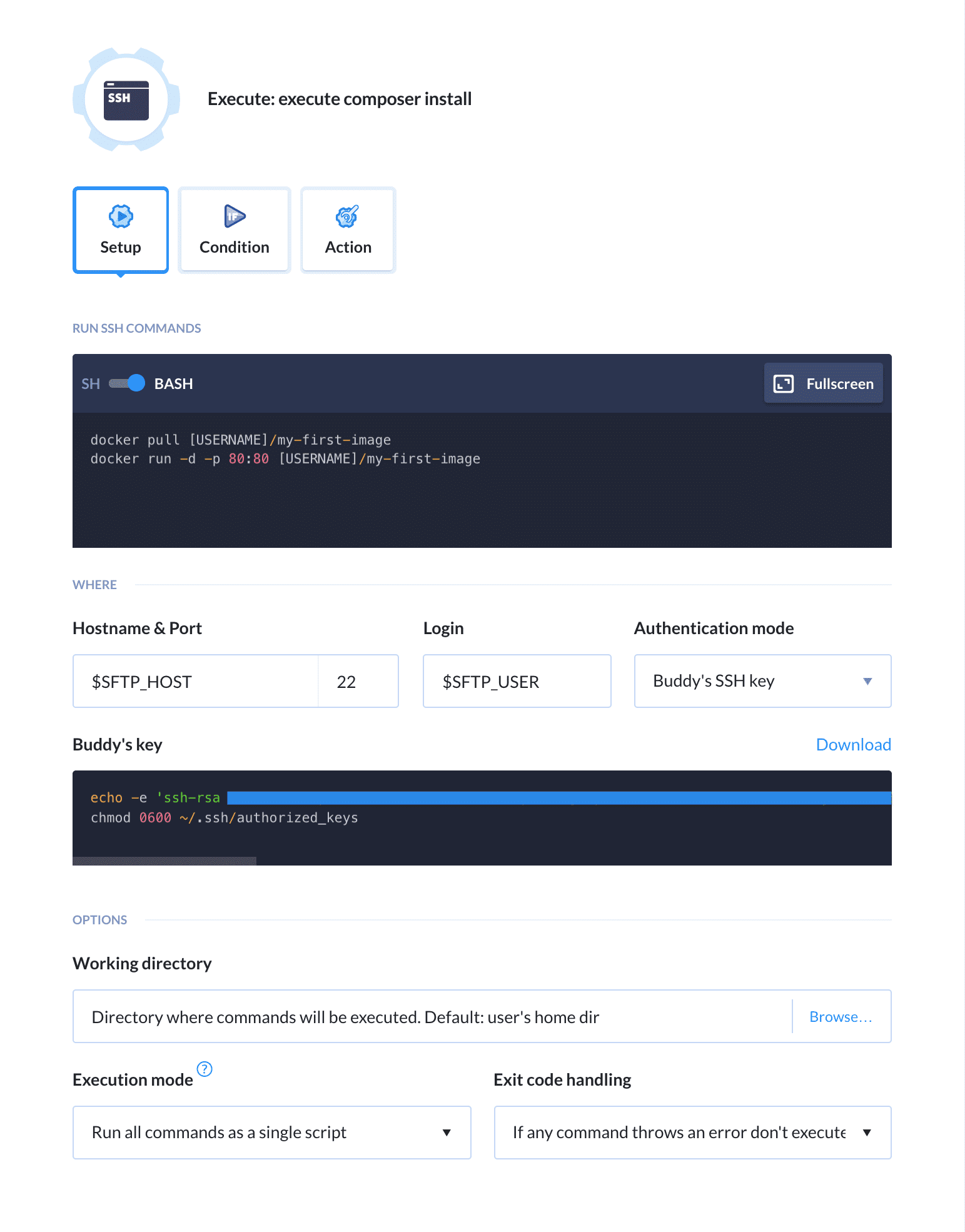 Once ready, make a push to the selected branch, and watch Buddy will perform all the tasks on auto-pilot. Sweet!

You can create a separate pipeline for each environment, and automate other common developer tasks, such as deployments, tests, and website monitoring.