In Buddy we help developers automate tests and deployments of their application. In this article we'll compare the most popular delivery workflows for PHP applications.

Every application is different, and so is its delivery process. The most common steps for PHP delivery usually look like this:

There can be more steps of course. For example, you may want to migrate the databases or restart your server via SSH – it all depends on the project specifications and hardware at disposal.

Before we can proceed, there are two things that need to be emphasized every single time the word "deployment" comes into play:

I. Keep everything in version control!

Application source, configuration files, documentation, db migration scripts—all of them should be kept safe and sound in the repo, period. Of course, to every rule there are exceptions (especially in IT), which brings us to the second thing:

We have covered the reasons why you shouldn't do it in details in our guide to building and deploying frontend apps. Let's recall, however, the one reason that developers dread the most (apart from being treated like a 24/7 IT service by the family): solving conflicts in code. Keeping dependencies and artifacts in the repository will sooner or later result in some serious hodgepodge in your project, and this will happen rather sooner than later.

Looking for a flexible server to handle the workload types behind your PHP app? Dedicated servers by phoenixNAP offer a range of deployment and configuration options that make it ideal for hosting dynamic applications.

Now that we know what to do and what not to do, let's proceed to the 5 ways of properly deploying PHP applications.

#1. Deploy repo w/o dependencies and artifacts and build your app on the server 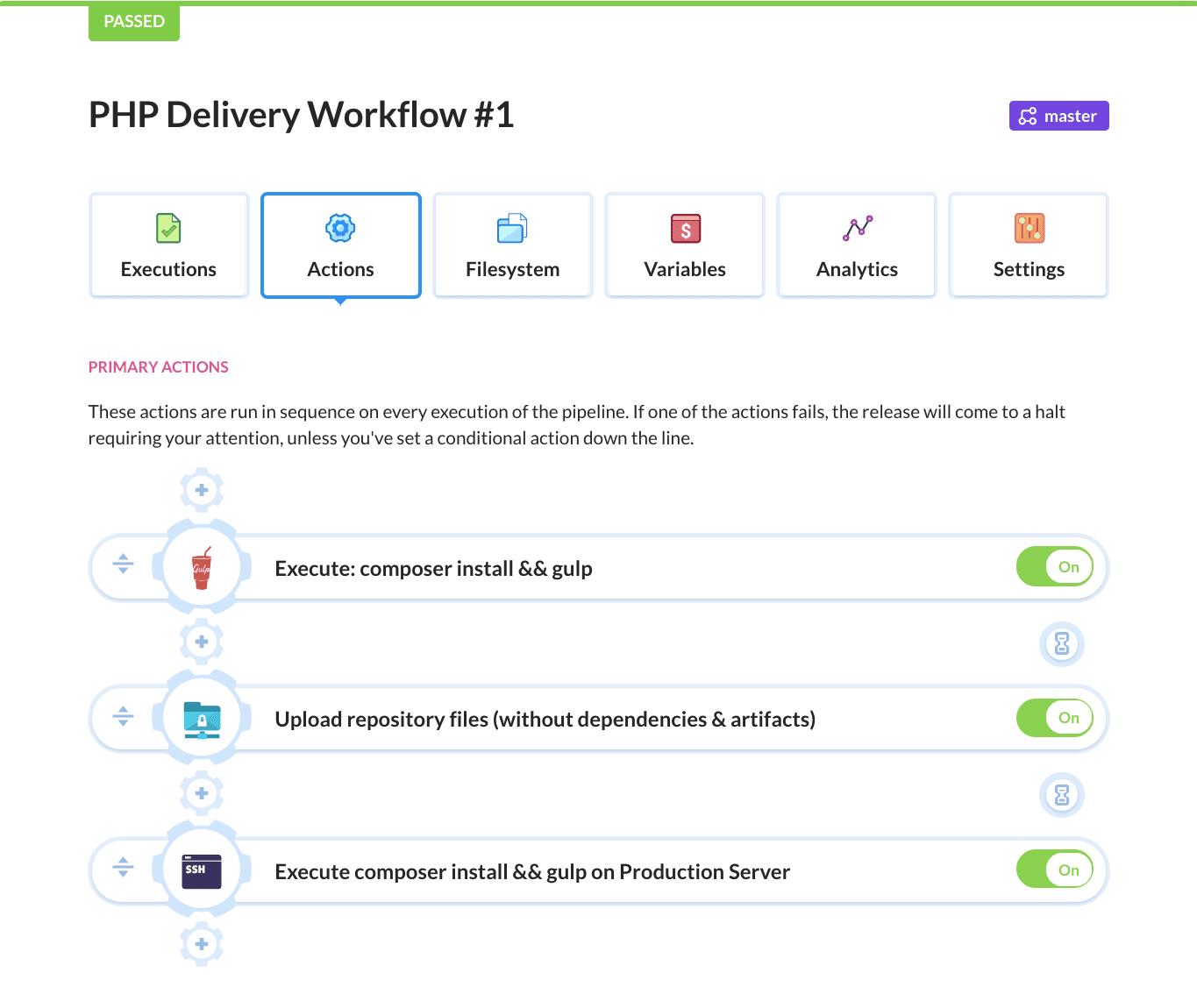 #2. Deploy repo with dependencies and artifacts

In this workflow, the application is first compiled and tested, then deployed to the server in its final form (with dependencies and artifacts): 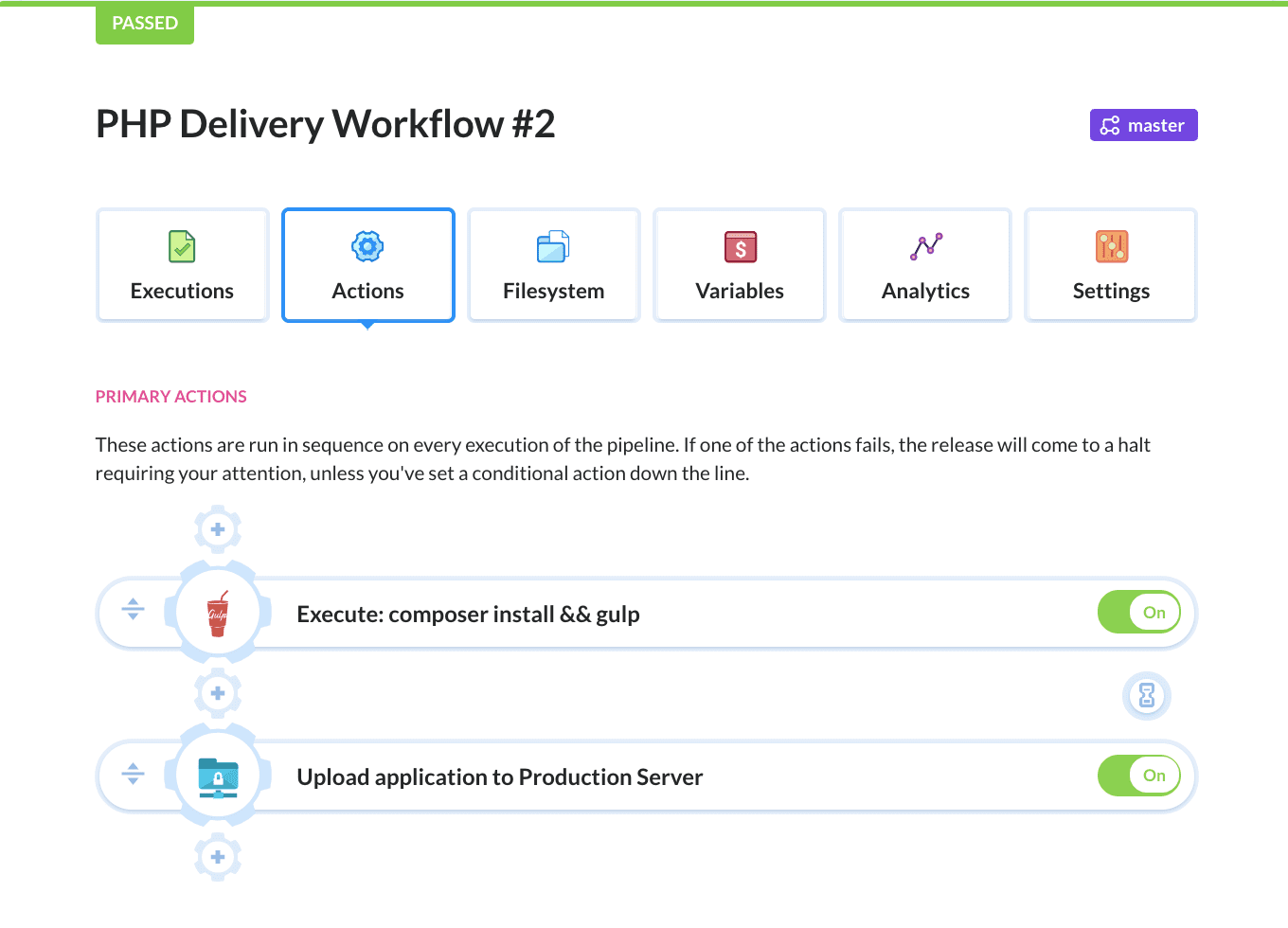 This is basically the same as #1, but requires Git installed on the production server. The deployment is made with git push instead of regular file upload. Then, in Git, the post-receive hook triggers the build.

This method has been very well covered in this article. 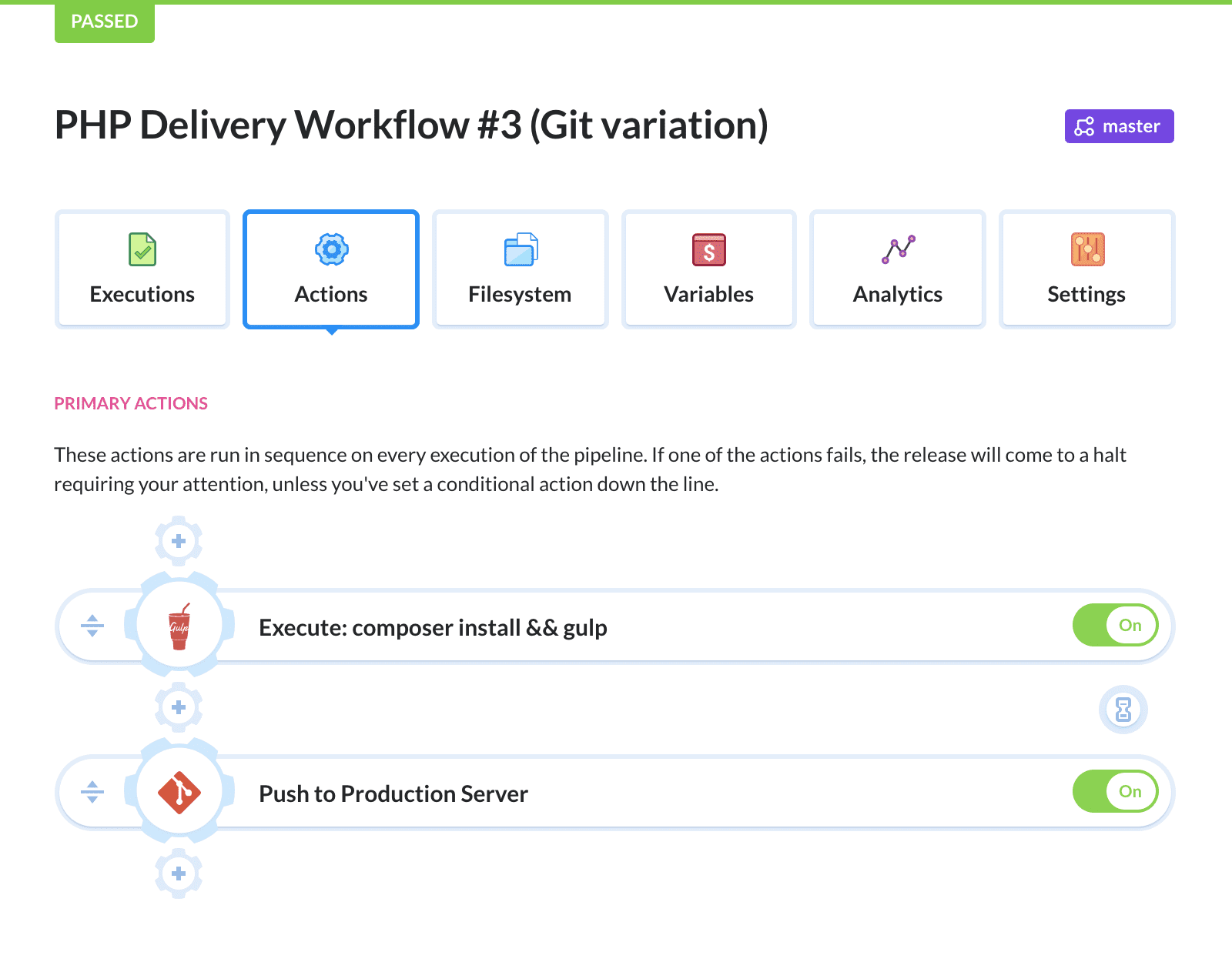 The workflows above have one flaw: the downtime. This means your application will not be available for the client during the deployment. The solution to that is very simple: deploy and build the application in a different folder than the one from which it's served. 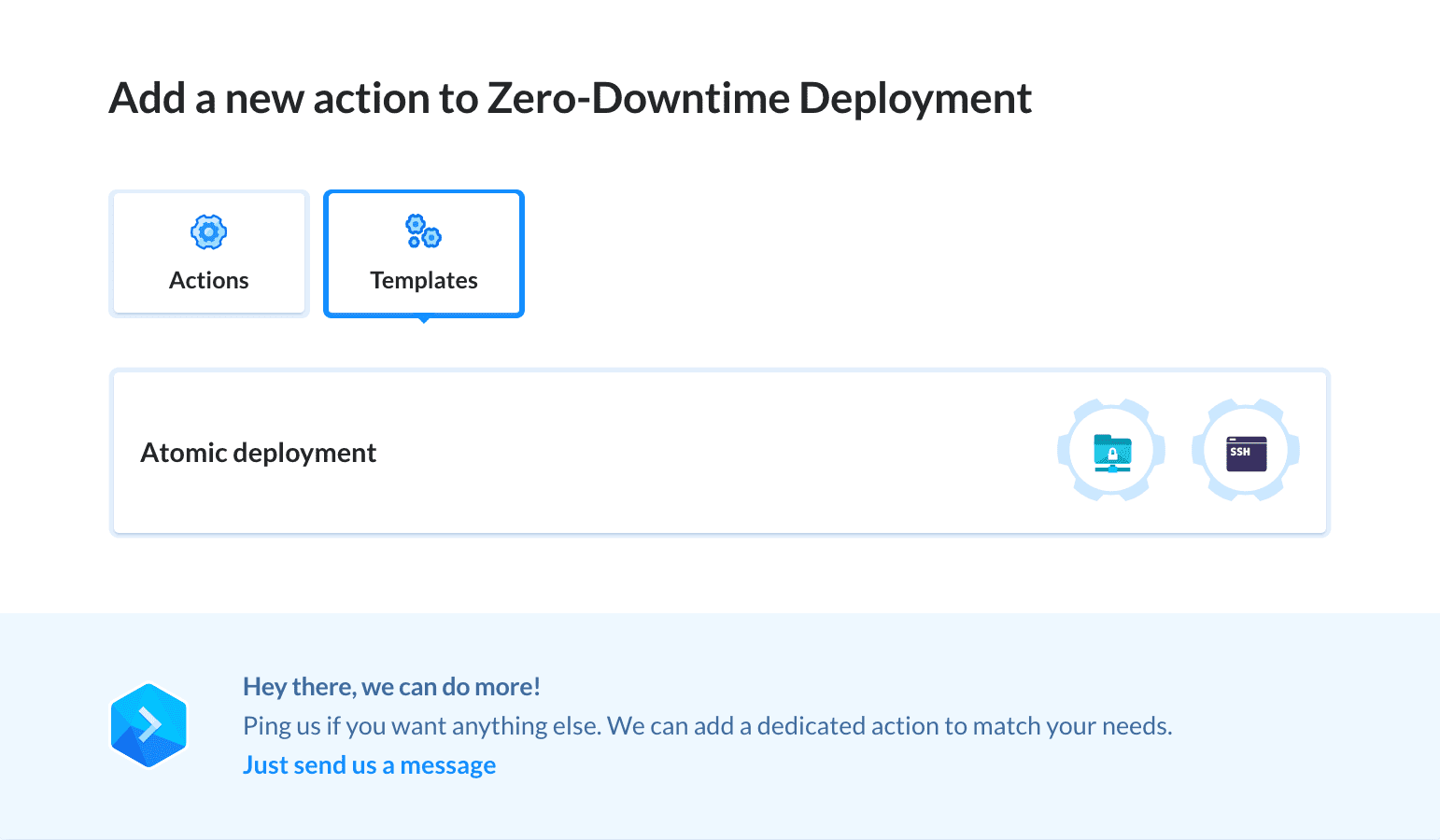 The process involves creating a couple of directories on the server:

Here's how it works: 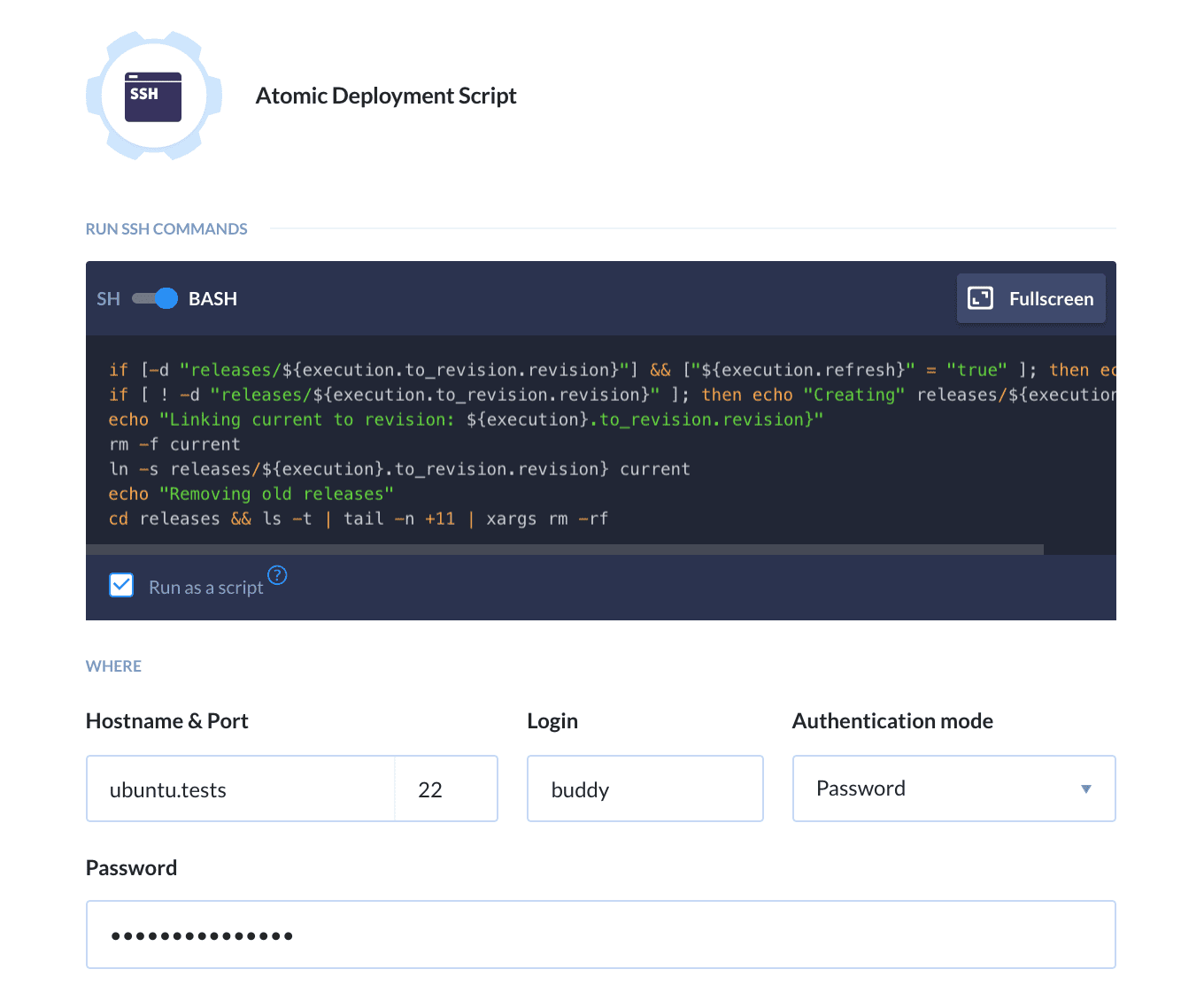 Docker is a virtualization method that allows you to define the working environment of your application in a single text file (Dockerfile), together with the way it should be built. The file is then used to build a Docker image with your app that can be launched in any environment supporting Docker (Linux/Mac OS/Windows). Docker is very fast and lightweight, contrary to "traditional" virtualization methods.

Here's an example Dockerfile for a PHP application:

The file can be used to build a Docker image:

Once the image is built, you can launch your application in a Docker container isolated from its host

On top of that, Docker images can be pushed and pulled from a Docker registry. This way you can easily build and image on one server/PC and run it on another. In this case, the whole delivery process will look like this: 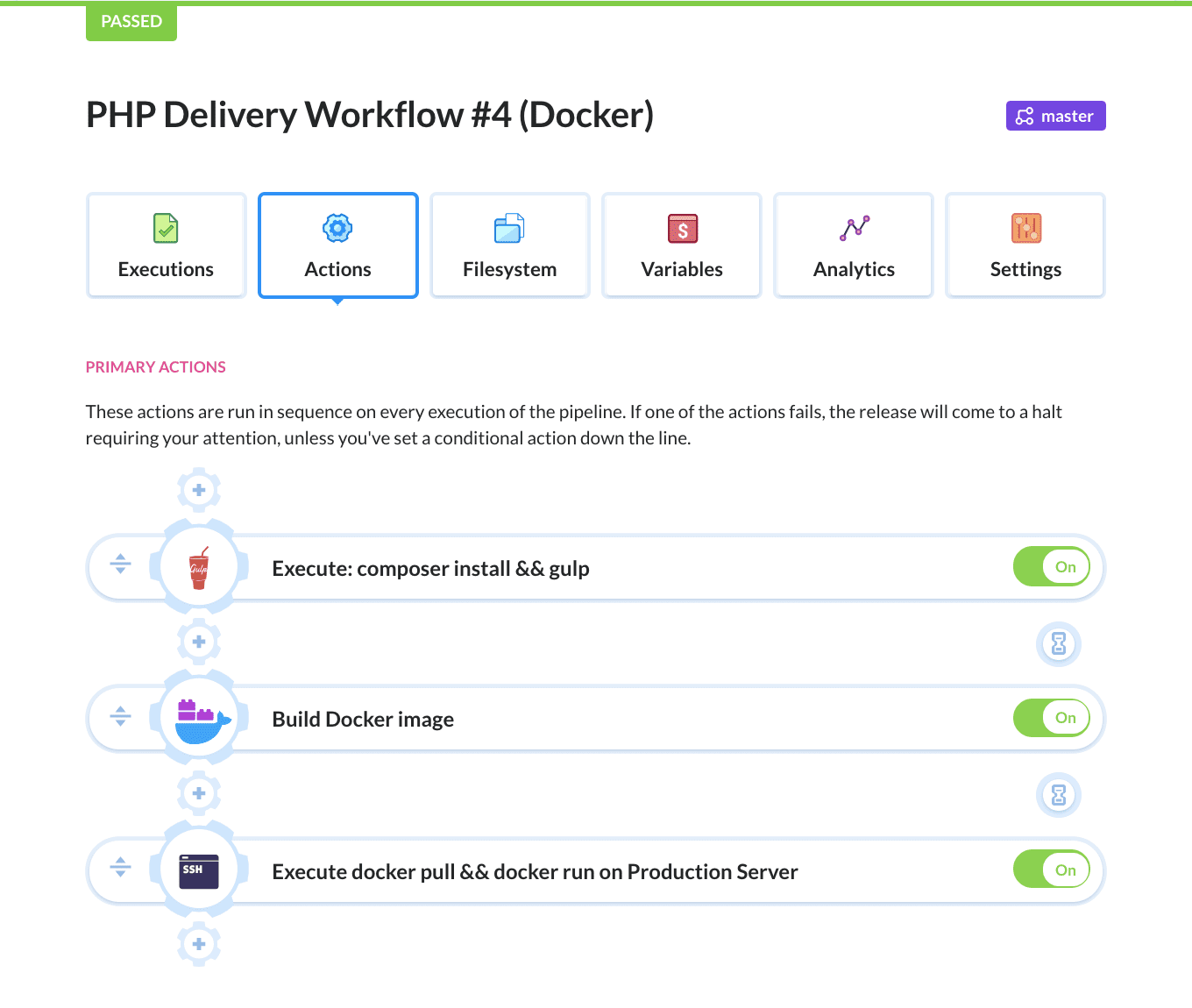 As always, the best delivery method is different for every working environment. It depends on the app specification, type of production server, team preferences, and infrastructure limitations. For us, at Buddy, Docker is the preferred way of deployment. Once automated, everything works like a breeze.

And what is yours? How do you deploy your app? Do you use Docker, too? Go on and share your workflow in the comments!