Build a Cross Platform Mobile App with Ionic 4 and Angular

In this tutorial, we’ll learn how to use Ionic 4 and Angular to build a cross platform hybrid mobile application.

Unlike native apps, a hybrid mobile application makes use of web technologies such as JavaScript, HTML and CSS (and their related technologies like TypeScript, Angular and Sass etc.) to build mobile applications. This works thanks to native containers like the popular Cordova tool and more recently Capacitor by the Ionic team. Both of these tools allow developers to call native SDKs on iOS, Android with one code base. The difference is that Capacitor is optimized for the Ionic framework and target desktop apps (using Electron) and Progressive Web Apps.

Ionic 4 is the latest version of the popular Ionic framework which is one of the most powerful and mature hybrid mobile frameworks. It’s tightly integrated with Angular, a popular platform for building client side web apps created by Google but starting with version 4, Ionic is framework agnostic. This means, developers can use it with plain JavaScript/TypeScript or other popular libraries like React or Vue.

Ionic 4 makes use of modern browser technologies such as:

In order to follow this tutorial, you will need to have a few prerequisites such as:

If you have the above prerequisites, let’s get started!

Ionic CLI is the official tool for creating and working with Ionic projects. Let’s install the latest version.

Open a new terminal and execute the following command:

Note: Please note that you may have to use sudo before your command in debian based systems or macOS since we are installing the package globally on the system. For Windows, you may need to run the command prompt or PowerShell as administrator. In case, you get any EACCESS errors, another alternative is to fix your npm permissions. See the docs for how you can resolve EACCES permissions errors when installing packages globally. If you install Node through NVM, this will be automatically resolved for you.

At the time of this writing ionic@4.12.0 is installed.

After installing the CLI, you can proceed to create your Ionic project by invoking the ionic utility with the start command.

You can either specify the other options, such as the project name and the template and type of project, immediately after the command or after being prompted by the CLI.

Go back to your terminal, navigate to your working directory and run the following command:

You will be prompted for the name of your project — Enter ionic-todos-app, the base template — Choose sidemenu (which generates a base project with a side menu with navigation in the content area).

The CLI will create the necessary project structure and files and will start installing the dependencies from npm: 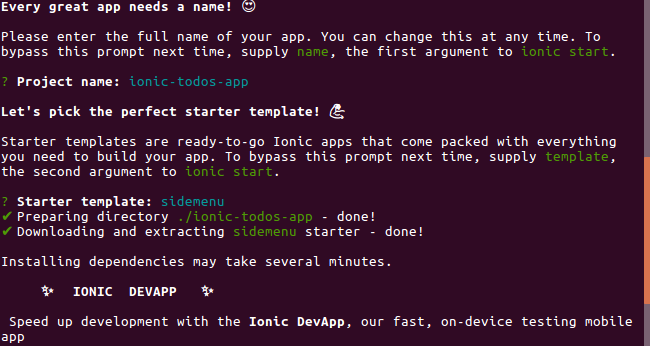 After that, the CLI will ask you if you Install the free Ionic Appflow SDK and connect your app? (Y/n). You can type n as we will not use any cloud services from Ionic in our example.

Ionic Appflow is a cloud service that allows you to continuously build, deploy and ship Ionic mobile apps.

After creating your project, you can now serve the application locally and play with it using your web browser. You don’t need a native mobile device or an emulator unless you want to use native device features like the camera or SQLite database. In fact, you can even mock native plugins to provide a fake class that has the same API as the native wrapper which allows you to work entirely in the browser when developing your mobile application.

Go back to your terminal, navigate to your project’s folder and run the ionic serve command to start a live-reload development server:

The server will be listening from the http://localhost:8100 address and your default web browser will be automatically opened and navigated to your app. If that’s not the case, just open your browser and go to that address to see your app up and running.

This is a screenshot of our app before doing any development: 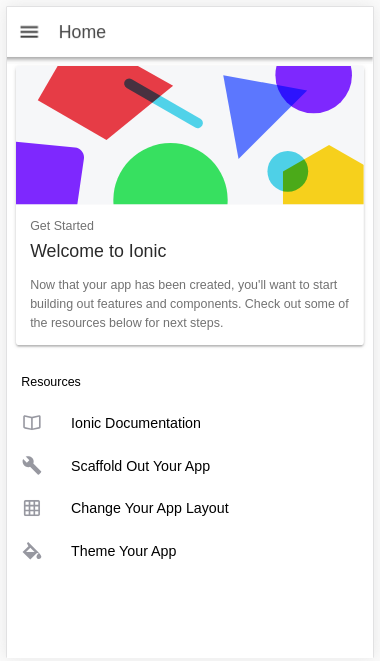 At this point, we already have a home and list pages and a side menu. Let’s remove the list page because we don’t need it.

First, remove the list folder with its contents from the src/app folder. Also, open the src/app/app.component.ts file, locate the appPages array:

Next, remove the entry that references the list page:

This will remove the link to the list page from the side menu: 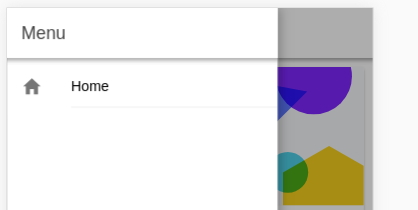 You also need to remove the reference to the list page from the Angular router configuration. Open the src/app/app-routing.module.ts file, locate the routes array:

Note: In an Ionic 4 project based on Angular, the official Angular Router is used to implement routing and navigation instead of the Ionic built-in routing mechanism.

Adding an About Page

Now, let’s generate an about page. Leave the development server running in the first terminal and open a new terminal, navigate to your project’s folder and use the ionic generate command to generate a page:

This will generate an about folder in the src/app folder with the following files:

And will also update the src/app/app-routing.module.ts file to include a route for the about page:

The [loadChildren](https://angular.io/api/router/Route#loadChildren) property of the Route interface is used to lazy load modules.

Ionic pages are implemented as Angular modules and they are lazy-loaded by the Angular Router.

Let’s now add an entry for the about page in the side menu. Open the src/app/app.component.ts file and add:

For the icon, we use an information-circle icon. You can see the list of available icons from the official website.

Next, open the src/app/about/about.page.html file and update it with the following content:

We used a ion-back-button component to create a back button that takes us to the previous page or the to the home route if the navigation stack is empty. we also added a primary color for the toolbar and the content area.

This is a screenshot of the about page at this point: 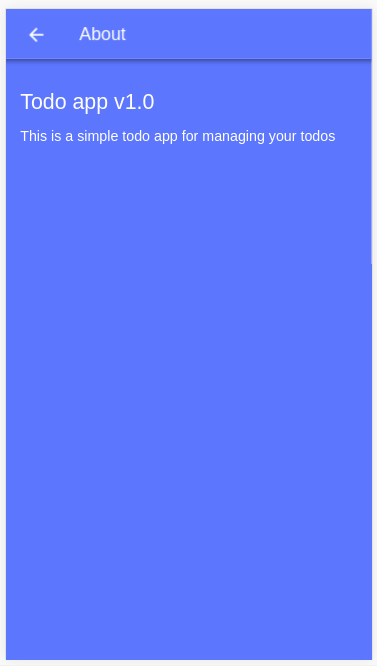 Building and Theming the Home Page

Open the src/app/home/home.page.html file and add the following code:

Next, open the src/app/home/home.page.ts file and update is accordingly:

We add a todos array that holds our todos and we use a for loop to fill the array with nine fake todos.

Each todo has a title, note and completed flag.

This is a screenshot of the home page: 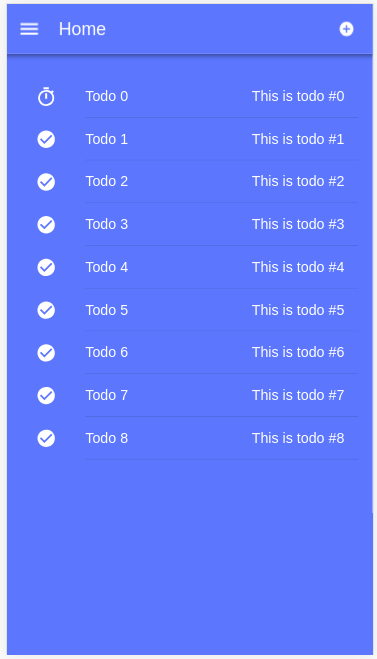 Theming the Side Menu

Let’s now theme the side menu. Open the src/app.component.html file and update it as follows:

This is a screenshot of our side menu: 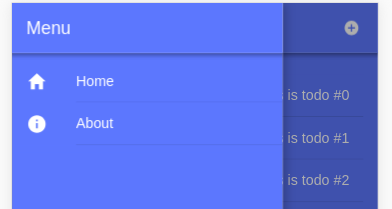 Until now we just hardcoded a set of fake todos, let’s add the code for actually creating todos.

Go back to your terminal and run the following command:

Next, let’s install Ionic Storage which will be used to save todos in the local storage of the Ionic app:

As the time of this writing @ionic/storage@2.2.0 is installed.

Open the src/app/todos.service.ts file then import and inject the Storage service:

Next, add the following interface:

Next, define the following methods:

Now, let’s update the home page to use TodosService. Open the src/app/home/home.page.ts file and add the following imports:

Next, inject TodosService via the constructor and implement the OnInit interface:

Next, define the ngOnInit() hook and fetch the todos from the local storage:

We store the fetched todos in the todos array.

Next, add the following method to create a random todo:

Now, we need to bind this method to the button for creating todos in the toolbar of the home page. Open the src/app/home/home.page.html file and add a click event with "``createTodo()``" as value :

If you now click on the button, a new todo with a random title will be created.

In this simple example, we create random todos but in a real world situation you need to add a form to get the todo information from the user before calling the createTodo() method to persist it in the local storage.

You can find the source code of this project from this GitHub repository.

In this tutorial, we’ve seen how you can get started with Ionic 4 to create cross platform mobile apps with web technologies such as TypeScript, SCSS and Angular.

Check out our tutorial
Angular Cheat Sheet for Beginners