Do more with MongoDB

Buddy CI/CD allows you to instantly implement MongoDB with 33 ready to use actions to automate your development and build better apps faster.

Use MongoDB in Buddy CI/CD
OverviewIntegrationsTutorialsAlternatives

The MongoDB service runs as a separate container but in the same network as the action to which is attached. This includes other services attached to the action. Buddy runs main action commands only once the service is fully initialized. There is no need to check MongoDB availability on your own. The service is terminated once the action is completed. The service is cacheable it means data generated and stored by the service can be set persistent between action executions.

How to connect to the service from the action, example: 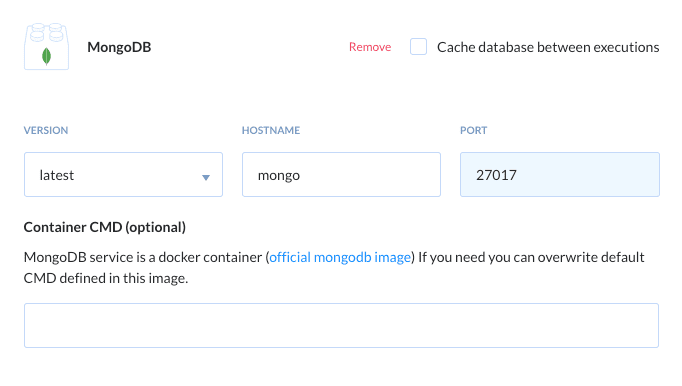 MongoDB image and it's options

Do more with MongoDB

Buddy allows you to instantly connect MongoDB with 33 actions to automate your development and build better apps faster.

MongoDB is a community-developed dynamic, open-source NoSQL document and object oriented database program that uses JSON-like documents with database schema. MongoDB is developed by MongoDB Inc. under the Server Side Public License (SSPL for short).