The working speed of pipelines is essential to any CI/CD tool. Buddy improves pipeline performance by caching resources that would otherwise have to be generated or downloaded on every execution. Here's what is cached:

Additionally, you can enable cache for services and databases attached to build actions or an extra cache individually per build action.

The pipeline filesystem is available for every action executed in the pipeline:

The files in the filesystem are persistent, which means that if you fetched dependencies in one execution then they will not be downloaded in the next one.

Builds, tests and other commands defined in the build action are executed in the context of a filesystem containing the repository. As we mentioned above, this is the primary cache of the pipeline.

If your builds fetch dependencies to a directory different from the default build context, you can cache them by entering their paths in the Cache tab: 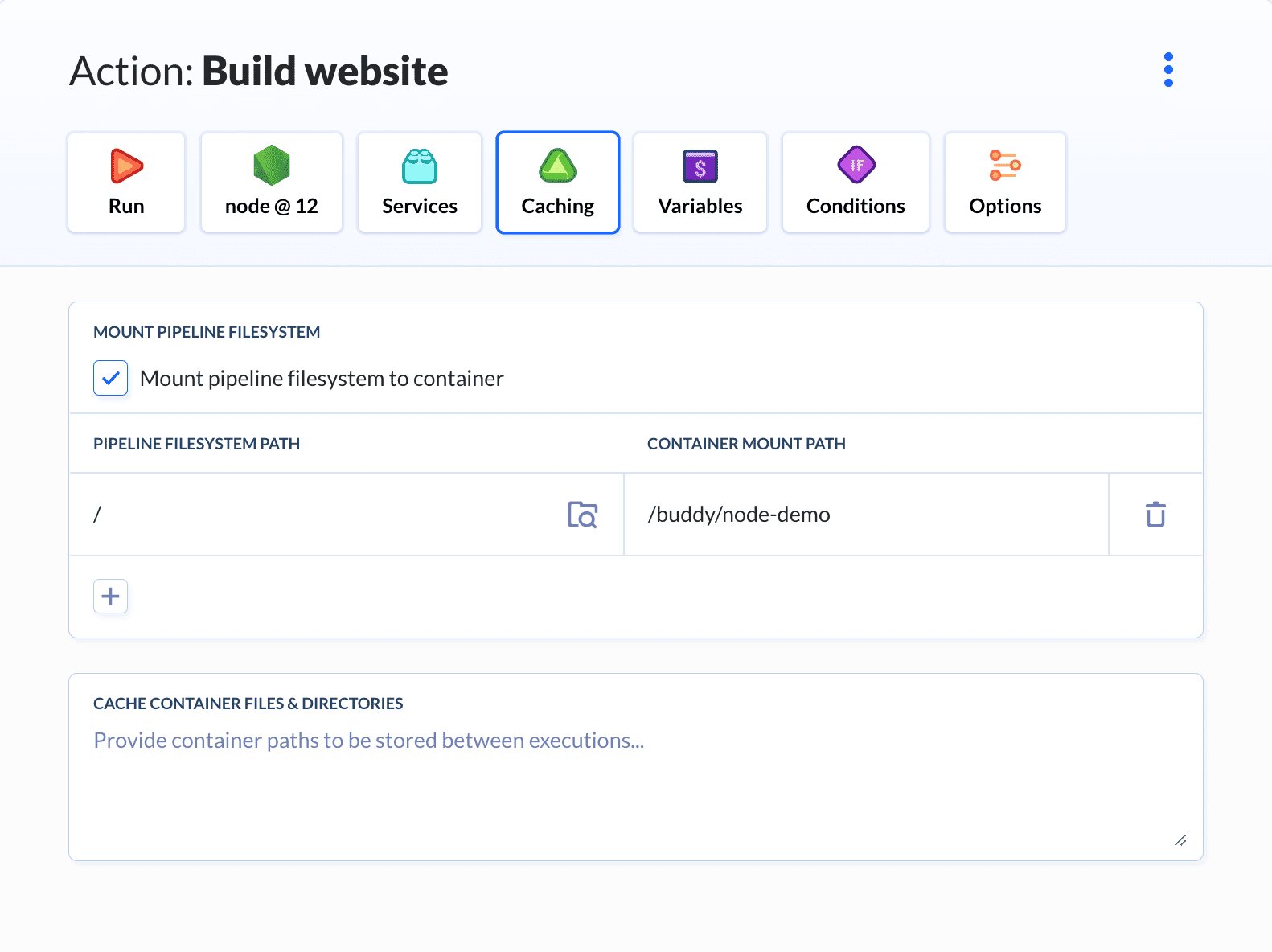 Cache tab in a Python action

Build actions are run in Docker containers. The build environment is based on the Docker image pulled from a registry. On the first execution, Buddy will pull and cache the image in the selected version. If you set the tag to 'Latest', it will check for a new version by running docker pull on every subsequent execution. The procedure will only download Docker layers missing in the previous execution.

This way you don't have to pull the full image every time, and you're always sure that you're using the most recent version. The same rule applies to the Run Docker Image action.

You can also customize the Docker image in the build action by entering commands in the Environment tab. The commands will be run on the first pipeline execution to create a new image. It will be used until a new image is chosen the customization commands change.

Learn how to activate a cache for your service.

The layers built in the Build Docker container action are cached. During the subsequent build, only those layers are built which weren’t built in the previous step.
This cache works within 1 pipeline. If you build the same layers in another pipeline, they’ll be built from scratch.

Read how Docker cache works and how to create a Dockerfile.

Images that you run in the Run Docker container action are cached and the cache relates to the whole workspace. You can find the way how it works above.

Sometimes you may want to clear the cache, for example, if you need to regenerate the artifacts. In such a case, you can either clear the cache once or select an option which will do that automatically before every execution.

You can check the overall volume of consumed space by going to Settings & Billing and entering the Plans, Usage & Billing tab.

You can also view the consumed space by entering the following URL: https://app.buddy.works/YOUR_WORKSPACE/payments

If you go to pipeline settings, you'll find the Clear pipeline cache option in the right menu: 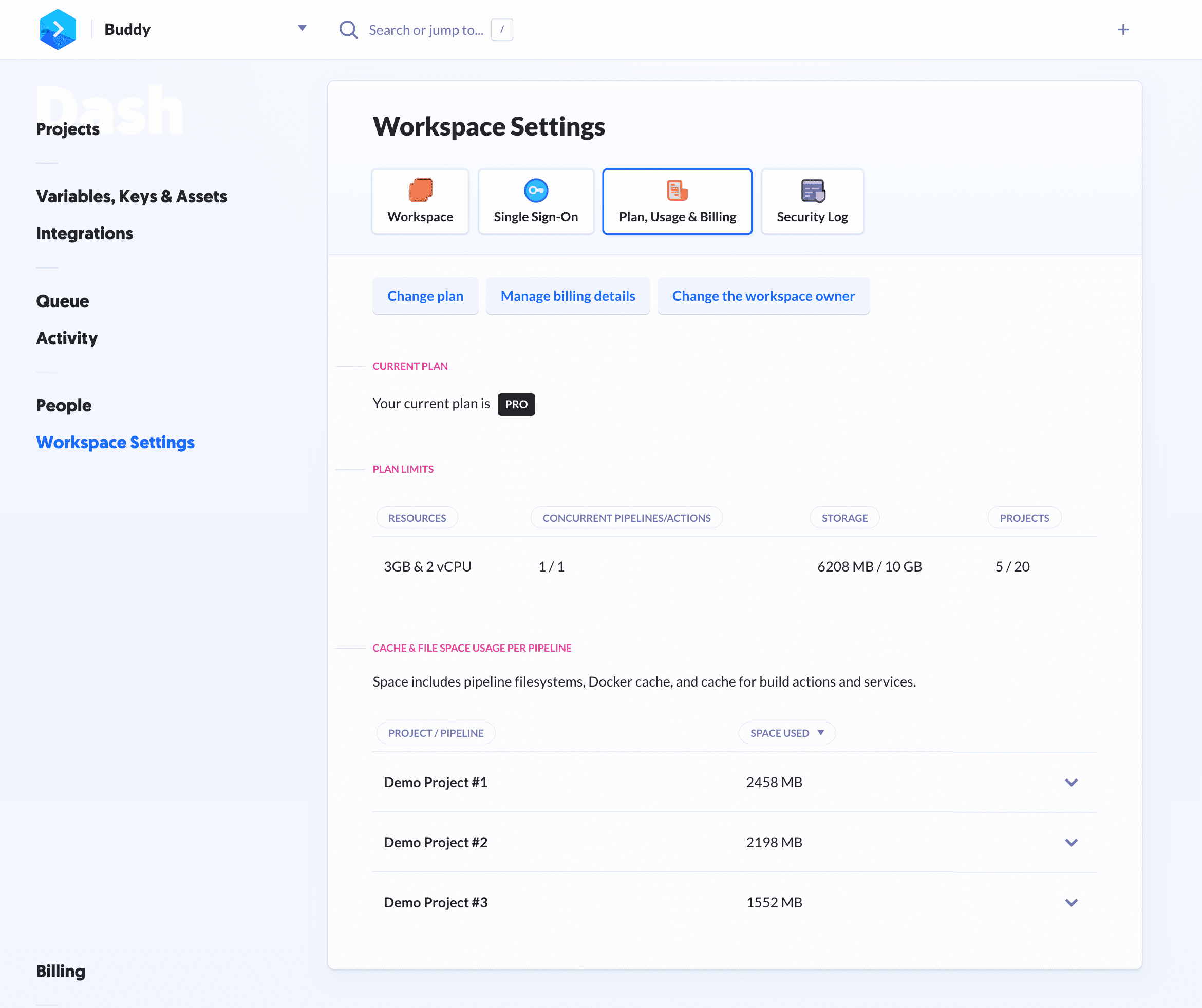 You can select the Clear cache before running option in the project options if you want it to happen automatically: 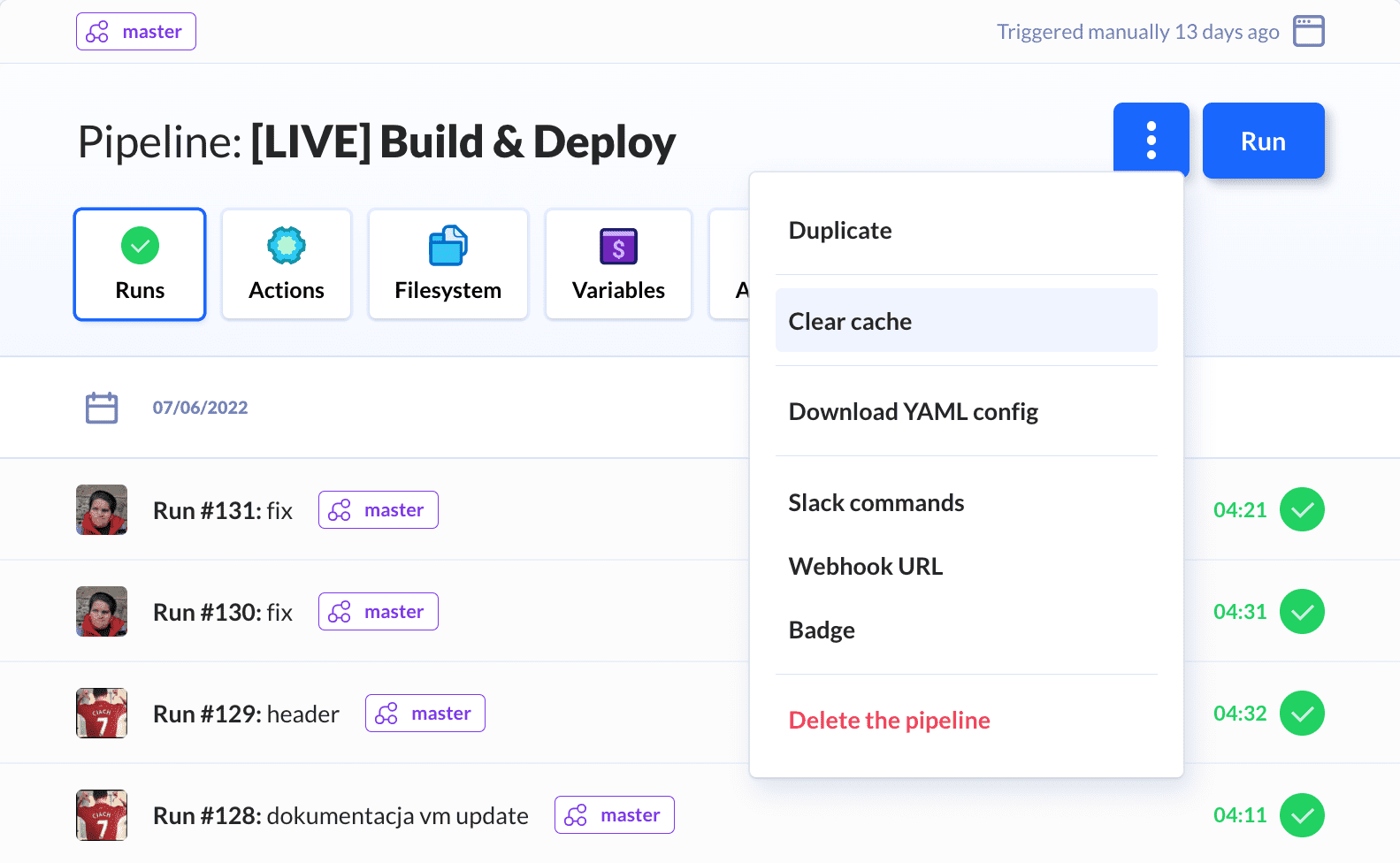 You can select this option one-time when you run the pipeline manually or you may use commit commands.